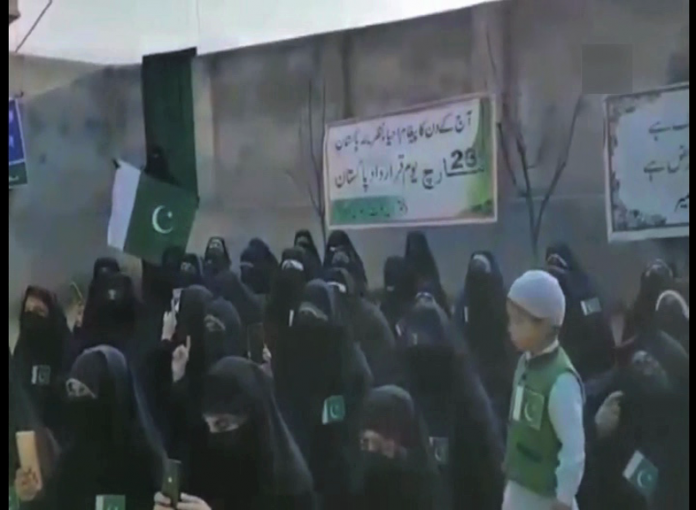 SRINAGAR: In occupied Kashmir, Dukhtaran-e-Millat (DeM) celebrated Pakistan Day in Srinagar, today, in which the party chief Aasiya Andrabi said that all Muslims in the sub-continent are Pakistanis.
Aasiya Andrabi addressing the party workers during a programme organized to commemorate the Pakistan Day said, “Every Muslim in the sub-continent is a Pakistani on the basis of Islam, Iman (faith), Quran and love for Prophet Muhammad (SAW).”
During the programme, Aasiya Andrabi and her supporters sang the National Anthem of Pakistan.
It is to mention here that Pakistan celebrates March 23 every year as its National Day to commemorate the adoption of the Pakistan Resolution by the Muslim League in Lahore on this day in 1940 that called for establishing an independent country for the Muslims of sub-continent.
Meanwhile, the All Parties Hurriyat Conference General Secretary, Ghulam Nabi Sumjhi, and the Grand Mufti of occupied Kashmir, Mufti Bashir-ud-Din Farooqi, in their statements issued in Srinagar felicitated the people and the government of Pakistan on the occasion of their National Day. They also prayed for the peace, progress and prosperity of the country.