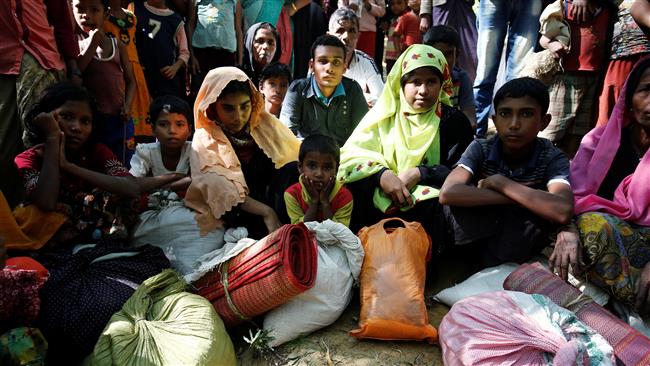 YANGON: Myanmar blamed Bangladesh on Tuesday for delays to a huge repatriation programme for Rohingya refugees, as the deadline passed for starting the return of the Muslim minority to strife-torn Rakhine state.
Nearly 690,000 Rohingya escaped to Bangladesh after a brutal Myanmar army crackdown began last August, while a further 100,000 fled an earlier bout of violence in October 2016.
In signs the unrest was continuing despite the repatriation plans, Bangladesh officials said Tuesday a huge fire burned and gunshots were heard in a village in Rakhine.
Myanmar agreed that from January 23 it would start taking those refugees who had fled since 2016 back from the squalid camps in the Cox s Bazar district of Bangladesh where they have sought shelter.
But a Bangladeshi official said Monday the programme would not begin as planned. Refugee Relief and Repatriation Commissioner Mohammad Abul Kalam said there was much more preparatory work to be done.
The complex process of registering huge numbers of the dispossessed has been further cast into doubt by the refugees themselves, who are too afraid to return to the scene of what the UN has called “ethnic cleansing”.
Mainly Buddhist Myanmar sees the Rohingya in Rakhine as illegal immigrants from Bangladesh and denies them citizenship.
Myanmar has been accused of drawing out the repatriation process by agreeing to take back just 1,500 people a week.
It has prepared two reception camps on its side of the border.
Myanmar officials said that by Tuesday afternoon no Rohingya had crossed back into Rakhine, the scene of alleged widespread atrocities by Myanmar s army and ethnic Rakhine mobs.
“We are right now ready to receive… we are completely ready to welcome them according to the agreement,” Kyaw Tin, Minister of International Cooperation told reporters in Naypyidaw, Myanmar s capital.
“We have seen the news that the Bangladesh side is not ready, but we have not received any official” explanation, he added.
With hundreds of Rohingya villages torched and communal tensions still at boiling point in Rakhine, rights groups say Rohingya returnees will at best be herded into long-term camps.
Those who return must sign a form verifying they did so voluntarily and pledging to abide by Myanmar laws.
Myanmar has sent a list of more than 1,000 “wanted” alleged Rohingya militants to Bangladesh, while headshot photos of the suspects have been widely circulated inside the country.
In a sign of the tensions surrounding the issue, a second Rohingya leader was killed in Bangladesh camps on Monday — allegedly after endorsing the returns programme.
Many in the camps are fearful of going back.
“We won t go there if they try to send us back… kill us here, because we won t go. If we go back, the Burmese (Myanmar) will kill us,” 12-year-old Mohammad Ayas said at a camp at Cox s Bazar.
Others said repatriation was a pipe dream while people were still trickling into the camps.
Mohammad Amin, who arrived just last week, described villages being set ablaze and women assaulted.
Backing up his claim, a senior Bangladeshi border guard at Cox s Bazar said a “big fire” was seen raging late Monday in an abandoned village in Rakhine.
It is believed the homes ablaze overnight belonged to Rohingya, the official said on condition of anonymity. The border region is controlled by Myanmar s forces, he added.
Another border official said he heard several gunshots before flames were seen leaping from the village.
Footage of the blaze quickly spread among Rohingya refugees in Bangladesh through social media, with many quick to blame Myanmar s security forces.
“The fire is designed to destroy the last remaining traces of Rohingya homes so that none of us can return to our villages,” activist Rafique bin Habib told AFP.
He said without homes, those Rohingya who were repatriated would be denied access to their ancestral lands and forced to live in displacement camps.
Bangladesh, one of Asia s poorest countries, has been besieged by an influx of Rohingya since communal violence flared in 2016.
It has tried to use the global outcry over the crisis to press Myanmar into taking back the refugees before they settle. …Agencies