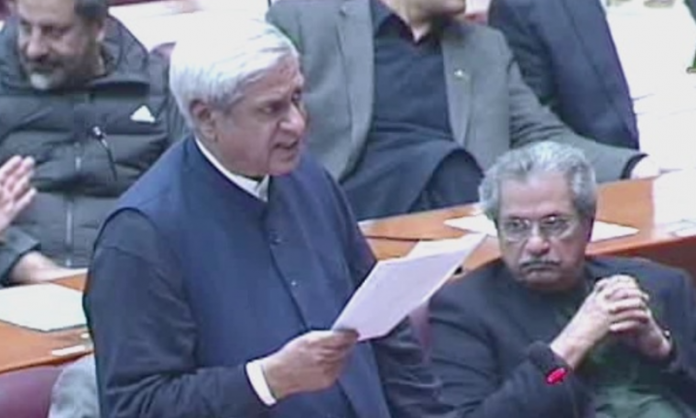 ISLAMABAD: The National Assembly on Tuesday unanimously passed a resolution calling for India to reverse the annexation of Jammu and Kashmir.
Chairman of Special Committee on Kashmir Syed Fakhar Imam tabled the resolution in the assembly.
The resolution “demands that India immediately reverse and rescind its illegal action August 5 and October 31, 2019”. It further says that India should also allow the media, international governments and rights organisations and observers to access the occupied region so that they are “able to assess and report the human rights situation there”.
The Indian government had on August 5, 2019 repealed Article 370 of its constitution, stripping occupied Kashmir of its special status. It also dividing up occupied Jammu and Kashmir into two union territories; one Jammu and Kashmir, and the other the Buddhist-dominated high altitude region of Ladakh. The bifurcation of the territory came into effect on October 31 last year.
The resolution passed by the parliament today also called upon the Organisation of Islamic Cooperation to “immediately convene” a special summit on the Kashmir issue.
It condemned the atrocities committed by the Indian forces in the occupied territory, including the detention of Kashmiri leadership and youth, usage of pellet guns against innocent civilians.
The resolution also denounced violence against women by the Indian forces, “especially the use of rape as a weapon of war” as well as the “deliberate targetting of civilian population” in ceasefire violations. It also noted with concern the continuing lockdown of occupied Kashmir and deployment of troops in the territory and India’s “strongarm tactics” to change the ethnic demography of the region.
The parliament welcomed the consultations of the United Nations Security Council held last month and lauded the role played by human rights organisations, statesmen and stateswomen, international media and the governments of China, Turkey, Malaysia and Iran.
Before the resolution was passed in the National Assembly today, a debate was held on the Kashmir issue where Minister for Human Rights Shireen Mazari said that for the first time in history, the world had accepted Pakistan’s narrative on the Kashmir dispute, “due to effective diplomacy by this government under Prime Minister Imran Khan’s leadership”.
She said that the prime minister had exposed “the Nazi-inspired ideology of RSS”.
“United Nations Security Council discussed the Kashmir issue in two different meetings. The European Union also discussed the matter. Pakistan’s stance on Kashmir is being heard and being corroborated internationally,” she said.
Responding to criticism levelled against the government from opposition benches, the minister said: “To say that this government had not done anything on the Kashmir issue is incorrect. The foreign ministry had raised the issue with multiple countries.
“The idea to send parliamentarians around the world to raise awareness regarding the Kashmir issue is a good one as the foreign ministry does not have the capacity to do this alone.
“However, these parliamentarians should first be equipped with facts about the matter,” Mazari said, adding that without facts, these visits will have “zero impact”.
She also elaborated on various letters her own ministry had written to the United Nations regarding the Kashmir issue.
Minister for Science and Technology Fawad Chaudry also spoke on the issue and said: “We don’t only stand with the people of Kashmir, we also have solidarity with the Muslims of India.
“Today, the Indian government had proved Quiad-i-Azam Muhammad Ali Jinnah’s point of view. He had foreseen at the time what a country with a Hindu majority will look like,” the minister said.
Minister for Aviation Ghulam Sarwar Khan said the Muslim countries around the world need to support Pakistan in the quest for a peaceful resolution of the Kashmir dispute.
Speaker National Assembly Asad Qaiser said that the lower house of Parliament had “effectively raised the plight of oppressed Kashmiri people at different forums abroad”.
Mufti Abdul Shakoor regretted international human rights organisations’ silence on the situation in occupied Kashmir.
“These blatant human rights violations are not tolerable to us. The entire nation is united on the issue of Kashmir,” Shakoor was quoted as saying.
PTI’s Sardar Nasrullah Khan Dreshek said, “Kashmir is Pakistan’s jugular vein. Time warrants that unity in our ranks is key for effectively and forcefully raising the Kashmir issue at the international level.
A delegation from Azad Kashmir also witnessed the National Assembly session.