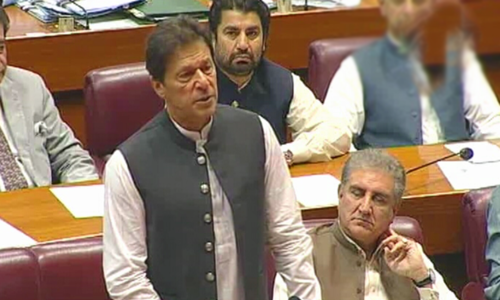 ISLAMABAD: The National Assembly (NA) on Monday unanimously approved the 26th Constitutional Amendment Bill which increases the number of seats in National and Khyber Pakhtunkhwa assemblies from the erstwhile Federally Administered Tribal Areas (FATA).
Under the bill, the number of NA seats from former FATA will be increased to 12 from six. In the Khyber Pakhtunkhwa Assembly, seats will be increased to 24 from 16.
Speaking on the NA floor, Prime Minister Imran Khan said the entire nation stood with the people of tribal areas who had faced difficult times. “The nation wants them to be mainstreamed and have a voice. I am happy that there is a consensus among all parties to increase their seats to mainstream them.”
The prime misted added that provinces would give three per cent of their share from the NFC award to the tribal areas. “I want to tell the provinces that the decision to allocate three per cent from the NFC award is necessary because of the destruction in FATA due to the war on terror. KP can never fulfil this from its budget.”
“Development of FATA will only take place when the provinces chip in the three per cent,” said Prime Minister Imran Khan.
The prime minister stressed that no area should get the feeling that they are not owned by Pakistan. “This sense of deprivation is very dangerous because it can be exploited by Pakistan’s enemies and they are doing this. Our development budget should be inclusive. We should try to raise up areas which have been left behind.”
Giving the modern day example of East and West Germany, Prime Minister Imran Khan said, “West Germany sacrificed and helped East Germany come up and the entire country prospered.”