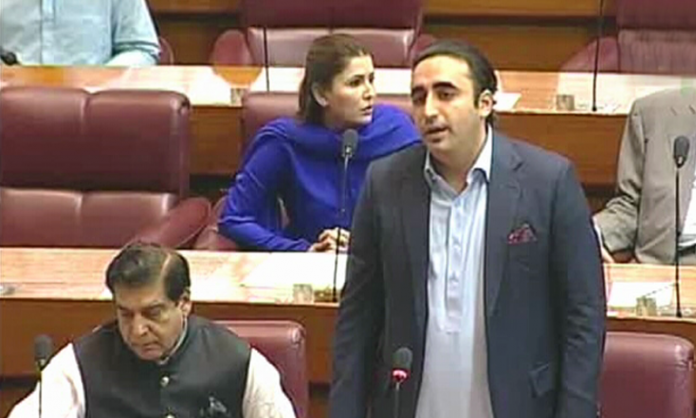 ISLAMABAD: Pakistan Peoples Party (PPP) chairman Bilawal Bhutto Zardari on Wednesday has alleged National Assembly (NA) Speaker Asad Qaiser of not performing his duties.
Addressing the NA session, the PPP Chairman demanded the speaker to issue production order of ex-president Asif Ali Zardari so that he can also participate in the parliament proceedings.
Earlier today, Bilawal took to Twitter and appreciated Muttahida Qaumi Movement (MQM) for speaking up for democratic constitutional right regardless of political differences. He said that MQM had demanded to issue production order of former president Asif Ali Zardari on the floor of National Assembly on Tuesday.
Innocent until proven guilty is a right not a privilege, he added.
On June 18, during the session, Speaker Asad Qaiser had asked opposition leader Shehbaz Sharif for budget speech but PPP parliamentarians protested and demanded production orders of Asif Zardari.
Afterwards, several PPP leaders regretted speaker‘s decision of not issuing the production order and announced to hold press conference.
On June 10, Asif Ali Zardari had surrendered himself to a team of the National Accountability Bureau (NAB) after Islamabad High Court (IHC) rejected his and his sister Faryal Talpur’s pre-arrest bail plea in the money laundering case.
Following the refusal of bail, a team of anti-corruption watchdog accompanied by police personnel had reached the residence of PPP co-chairman and arrested him.
Asif Zardari was taken to NAB office in Rawalpindi where he was shifted to cell no 2.
On the occasion, small scuffles erupted between police and supporters of PPP outside his family’s residence in Islamabad as he was taken into custody.
The charges in the latest case centre around allegations Zardari laundered vast sums of money through suspect bank accounts and companies.
NAB is conducting investigations in pursuance of the Supreme Court’s verdict in the money laundering of billions through fake accounts case wherein it forwarded the joint investigation team (JIT) report with directions to investigate and file references.
Zardari has repeatedly dismissed allegations he had a hand in the scheme. Never popular and always shrouded in controversy, Zardari — who was once jailed for 11 years for corruption — stepped down from the president s office in 2013. But he has continued to serve as co-chairman of the opposition PPP.