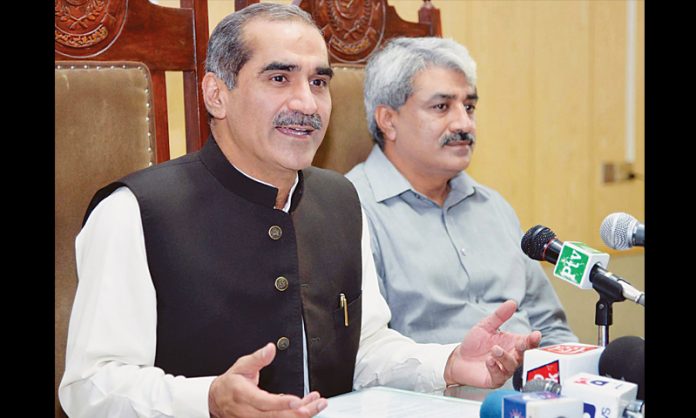 LAHORE: The National Accountability Bureau (NAB) has arrested Pakistan Muslim League leaders Khawaja Saad Rafique and his brother Khawaja Salman Rafique after their bail pleas were rejected by the Lahore High Court on Tuesday.
The PML-N leaders were detained after the Lahore High Court (LHC) rejected their request for an extension in their bail petitions.
NAB has been probing the Rafique brothers in the Paragon Housing scam.
A two-judge bench headed by Justice Tariq Abbasi heard the petition of the brothers seeking an extension in their interim bail. Initially, the court had extended their interim bail till December 13, however, the bench latrer rejected their petitions. Both of them were facing NAB inquiry in Paragon Housing Society scam.
A division bench of the Lahore High Court on November 06 extended interim bail granted to Pakistan Muslim League-Nawaz (PML-N) leaders and directed the anti-graft body to decide their application for transfer of inquiry out of Lahore at the earliest.
As hearing resumed, the court asked the NAB prosecutor why NAB wanted to arrest them when they had left them at the mercy of the court. The court admonished the prosecutor after he failed to present record to justify arrest warrants against the Khawaja Brothers. The court showed his anger at the non-production of record and directed prosecutor to bring record and apprise the court of allegations which led to issuance of arrest warrants against both brothers.
In a related issue about transfer of NAB inquiry, senior lawyer Abid Saqi appeared on behalf of Khawajas and expressed their distrust in the accountability watchdog and its Lahore DG Shahzad Saleem. The Khawaja Brothers blamed the official for doing character assassination and running a media trial against them.
They mentioned that on November 8, the NAB DG “in complete disregard to the standard norms of the investigationprocess, participated in various talk shows”. “He [DG NAB] went on to make partisan, partial and prejudicial statements pertaining to the investigations since pending and insisted upon his predisposed and jaundiced opinion [the applicants are guilty],” the application read.
“The DG did not have the authority to make above sweeping remarks at this juncture when the matter is still pending and particularly he is investing the same,” they added.
They claimed that they were facing maliciously motivated inquiries and mentioned that no credible evidence could be collected against the applicants to attract the mischief of any offence under the National Accountability Ordinance, 1999. “The investigation teams were bent upon making out a case against the applicants by any means whatsoever,” they added. On it, a two-member bench led by Justice Tariq Abbasi, court disposed of the petition and directed NAB chairman to decide it soon.
Khawaja brothers’ counsel argued that NAB had sought relevant documents which they had already provided to anti-watch dog. They apprehended that they would be arrested as soon as they appeared before the NAB officials. He pointed out that NAB had adopted a practice of summoning people for a specific inquiry but arrest them in some other case as had happened in Shahbaz Sharif’s case.
NAB counsel told the court that three cases were pending against Saad Rafique while only one is against Salaman Rafique. After hearing both sides, the court extended interim bail of both until December 05. The LHC had granted interim bail to both on October 15 after the National Accountability Bureau (NAB) had initiated a corruption probe against them.
The Khawaja Brothers had stated that NAB was harassing them and wanted to arrest them. The two brothers said that they had provided all records regarding the allegations levelled against them. The anti-corruption body had launched a probe against Saad Rafique and his brother in the Paragon Housing Society scam.