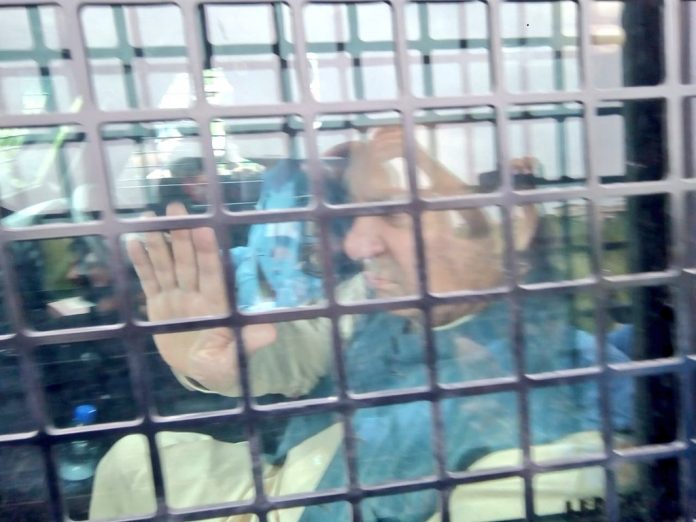 ISLAMABAD: The accountability court on Monday adjourned hearing of Al-Azizia and Flagship Investment cases till August 15 and summoned Panama JIT head Wajid Zia for cross questioning on the date.
Former prime minister Nawaz Sharif was produced before an accountability court from Adiyala jail today for hearing of corruption references.
As per details, following an Islamabad High Court (IHC) order to transfer the remaining corruption references against Sharif and his two sons to a different court, Accountability Court Judge Mohammad Arshad Malik conducted first hearing on Thursday and summoned deposed prime minister Nawaz Sharif and the head of joint investigation team (JIT) in Panama Papers case Wajid Zia on Aug 13.
Stringent security arrangements were made for today. The ousted prime minister was brought in an APC to the court. The vehicles carrying jammers and ambulances were also included in the security caravan. More than 500 police personnel are being deployed in and outside the court and only those issued passes were allowed to enter in the court.
On July 6, 2018, Accountability Court Judge Bashir convicted Sharif, his daughter Maryam Nawaz and son-in-law retired Capt Mohammad Safdar in the Avenfield reference and awarded them 10-year, seven-year and one year imprisonment, respectively.
On July 28, 2017, The Supreme Court disqualified the PML-N supremo from holding the office of prime minister and directed the National Accountability Bureau (NAB) to file three references against the former premier and his children in the accountability court with a directive to conclude the trial within six months.