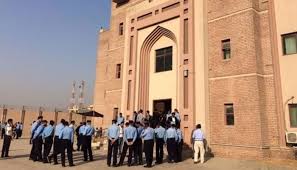 ISLAMABAD: An accountability court on Thursday rejected the petition to transfer the Al-Azizia corruption reference against the Sharif family from Judge Muhammad Bashir’s court.
Former prime minister Nawaz Sharif and his family members are facing three corruption references in the accountability court — Avenfield Properties, Al-Azizia Steel Mills and Flagship Investments — in which they are accused of money laundering, tax evasion and hiding offshore assets.
The hearing went underway after Nawaz Sharif’s lawyer Khawaja Haris and the National Accountability Bureau (NAB) Prosecutor Sardar Muzaffar Abbasi appeared in the accountability court.
The defence counsel asked for more time to present a copy of the apex court’s order for an extension in wrapping up the corruption references against Nawaz and former finance minister Ishaq Dar.
The hearing was then adjourned till 12pm.
As the court resumed the hearing, the NAB prosecutor said that the Supreme Court’s extension order was yet to be received. To this, the judge asked what the apex court’s order entailed. Abbasi responded that a six-week extension had been granted to the anti-graft body to wrap up the corruption references. The judge remarked that it was yet to be seen what Supreme Court order said.
Haris then requested the court to issue an order on the transfer request. Judge Bashir responded by saying that he did not have the mandate to transfer the reference after indictment. The defence then requested for the hearing to be adjourned till Tuesday so it could contact the relevant forum.
The NAB prosecutor, however, argued that Judge Bashir should hear the case as he had indicted the accused and the hearing had been presided over by him. “It would be better if you [Judge Bashir] hear this reference,” Abbasi remarked.
The defence counsel contended that the verdict already announced by Judge Bashir was common with other references.
“We should see justice getting served too,” said Nawaz’s lawyer, adding that the matter had been raised in the Supreme Court to bring it to the apex court’s attention. He further said that the defence had only informed the top court that it would take time for the case to be transferred.
Remarking that only the high court held the mandate to transfer the case, Judge Bashir rejected the transfer petition.
The hearing was then adjourned till July 17.
The trial against the Sharif family had commenced on September 14, 2017.
The corruption references, filed against the Sharifs, pertain to the Al-Azizia Steel Mills and Hill Metal Establishment, offshore companies including Flagship Investment Limited, and Avenfield properties of London.
Nawaz and his sons, Hussain and Hasan, are accused in all three references whereas his daughter Maryam and son-in-law Safdar are accused in the Avenfield reference only.
The two brothers, based abroad, have been absconding since the proceedings began last year and were declared proclaimed offenders by the court.
The Supreme Court had originally set a deadline of six months to conclude the cases. The court originally had a deadline of six months which ended in mid-March but was extended for two months after the judge requested the apex court. Later, the deadline was extended twice more, to around July 10.
On July 10, the Supreme Court extended the deadline in the high-profile case for the fourth time, granting Accountability Court-I Judge Mohammad Bashir a six-week extension to conclude the corruption references.