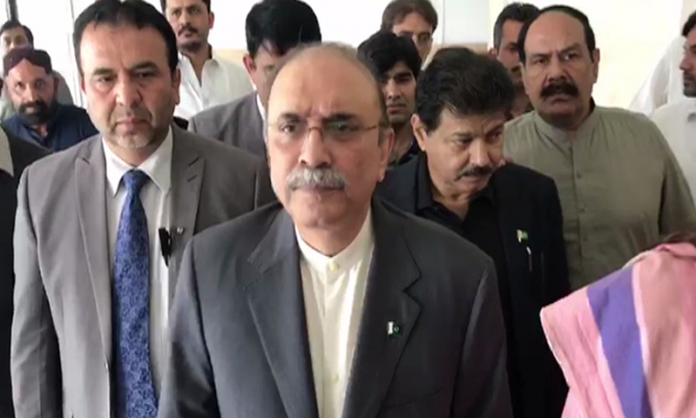 ISLAMABAD: An accountability court in Islamabad on Tuesday rejected a petition filed by former president Asif Ali Zardari, who has been put in jail on judicial remand, seeking his shift to a hospital for medical care.
The court remarked that the court doesn’t have jurisdiction over the matter, and it should be referred to the relevant forum.
Yesterday, Judge Muhammad Bashir reserved a verdict in the same application after hearing arguments from Zardari’s advocate Latif Khosa.
Khosa argued before the court that his client’s life was in danger and it was his Constitutional right to avail medical facilities in the jail.
“Zardari doesn’t want anything from this government, but his legal rights must be ensured we hadn’t asked for an apology from even Zia-ul-Haq,” he said.
“Judicial relief is our right if Zardari suffers any kind of heart ailment, these people wont transfer him to a hospital it takes an hour-and-a-half to reach a hospital from the Adiala Jail,” he mentioned.
“A medial board had recommended shifting Zardari to PIMS for getting medical care and these people took him to the hospital just for a day and shifted him back to the jail on the very next day,” he further informed the court.
Khosa pleaded with the court to direct authorities to allow Zardari his personal attendant until he stays in his prison. “Our people will set up tents in front of the jail,” he warned.