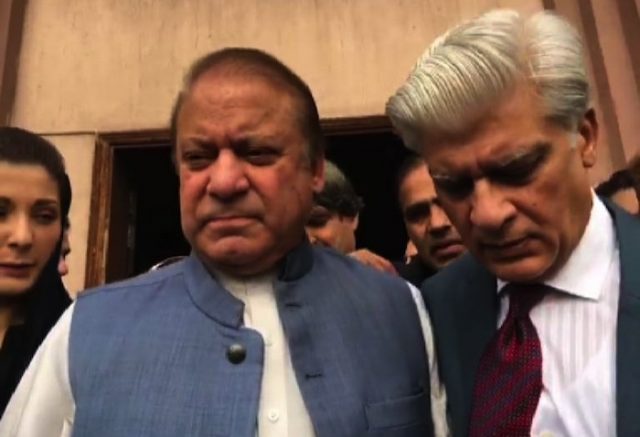 ISLAMABAD: Prosecution witness and the National Accountability Bureau (NAB) Investigation Officer (IO) Imran Dogar testified that ousted premier Nawaz Sharif is the beneficiary owner of two offshore companies; Neilson and Nescol.
The Joint Investigation Team (JIT) formed to probe the Panama Paper allegations against the Sharif family had earlier declared that both companies are owned by Maryam Nawaz.
An accountability court in Islamabad resumed the hearing of the Avenfield reference filed by NAB against the Sharif family. Judge Bashir of the accountability court presided over the hearing at the Judicial Complex. Former premier Nawaz and daughter Maryam were both present in the court.
Nawaz’s counsel, Khawaja Haris, presented arguments against the prosecution while NAB’s prosecutor Sardar Muzaffar Abbasi requested the court to record Dogar’s statement. “Nawaz is the beneficial owner of two offshore companies named Neilson and Nescol,” said the IO.
“However, the documentation received from the Mutual Legal Assistance (MLAs) documents do not correspond Nawaz, Maryam and sons Hassan and Hussain as owners,” he added. Dogar further added that all documents received by NAB were provided in response to MLAs written by JIT members.
The MLAs requested information pertaining to the true owners of the two offshore companies. Nawaz was the owner of London Flats while being in office, Dogar revealed.
In his court statements yesterday, Dogar had testified that London Flats have been in use by Nawaz and other case nominees since 1993. “The investigations reveal that Nawaz owned the flats while still being in office,” he said, adding, “the flats were purchased by Nawaz through Neilson and Nescol offshore companies.”