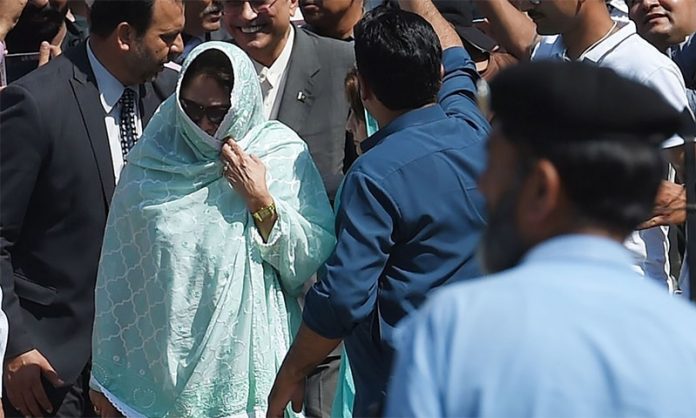 ISLAMABAD: PPP leader Faryal Talpur, the sister of former president Asif Zardari who was arrested by the National Accountability Bureau (NAB) earlier this week, was arrested by NAB officials in Islamabad on Friday in connection with a case pertaining to money laundering through fake accounts, a NAB spokesman said.
A five-member NAB team including female investigators is at Zardari House, Islamabad, which was notified as a sub-jail by the NAB chairman earlier today “for the purposes of detention of accused under the NAO, 1999”, according to a notification issued by the accountability watchdog.
Former president and PPP co-chairman Asif Zardari was arrested on Monday after cancellation of his pre-arrest bail by the Islamabad High Court in the fake bank accounts case, prompting a strong reaction from the opposition and sporadic protests by PPP workers in various parts of the country, mostly in Sindh.
The NAB said the grounds for arresting Zardari included whitening ill-gotten money through fake accounts, acquiring stakes in Summit Bank through fraudulent means, using Omni Group as a hedge between himself and fake accounts, receiving millions of rupees from two fake accounts, and getting unauthorised payments released for construction of a Karachi plot.
Zardari is currently on physical remand in NAB custody. NAB sources told DawnNewsTV that investigators, after their questioning of Zardari, had concluded that Talpur’s arrest was “unavoidable”.
Talpur will be produced before an accountability court tomorrow to seek her physical remand.