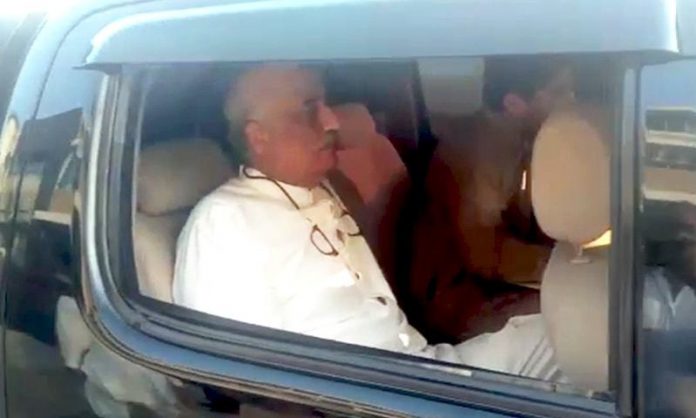 SUKKUR: The National Accountability Bureau (NAB) has on Saturday produced Pakistan People Party (PPP) senior leader Khurshid Shah before an accountability court in Sukkur.
The PPP leader was shifted to Sukkur from Islamabad on PIA flight PK-631 on Friday. On the arrival of Khurshid Shah, tight security arrangements were made by the Sukkur administration. He was shifted to NAB office from Sukkur Airport.
Heavy contingents of police and Rangers were deployed to meet any untoward incident. Hundreds of PPP workers and some local leaders reached the airport to receive the detained PPP leaders but were not allowed to enter the airport premises.
Khurshid Shah’s son MPA Syed Fakhar Shah, Sindh Transport Minister Syed Awais Shah and Mayor of Sukkur Arsalan Islam Sheikh also reached the NAB office but they were not allowed to meet PPP leader.