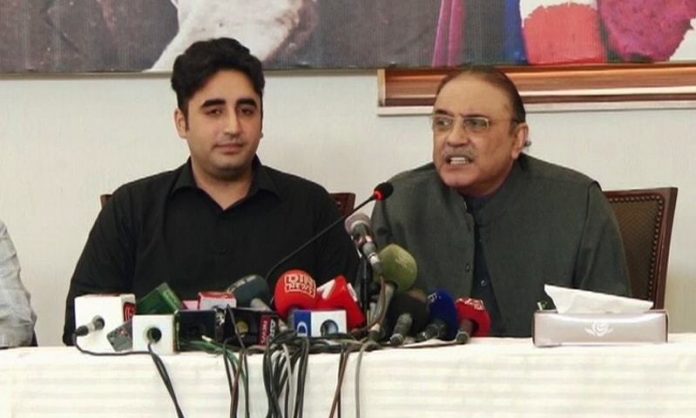 RAWALPINDI: The National Accountability Bureau (NAB) on Friday summoned PPP co-chairman Asif Zardari and chairman Bilawal Bhutto in the fake accounts case on March 20.
The banking court ordered to transfer mega money laundering case from Karachi to Rawalpindi on the National Accountability Bureau’s (NAB) plea.
During the hearing, the banking court accepted the NAB plea of moving the case to Rawalpindi from Karachi. However, former president Asif Ali Zardri and his sister Faryal Talpur were absent during the hearing.
Following the arguments, the court had reserved its verdict earlier this week. The court today announced the verdict, allowing the case to be transferred from Karachi to Rawalpindi.
Subsequently, the banking court cancelled the interim bails granted to Zardari, Talpur and others as the case had been transferred to a different court.
As the verdict was announced, the sons of Anwar Majeed, one of the co-accused, left the court, following which a team of Federal Investigation Agency (FIA) went after them to make arrests.
After the details verdict, the interim bails of Zardari and Faryal Talpur have been ended. However the interim bails of other suspects in money laundering case Nimr Majeed, Zulqarnain, Ali Majeed and Bahria Town Malik Riaz son-in-law Zain were also declared null and void after the court verdict.
It is worth mentioning that the Pakistan Peoples’ Party (PPP) leadership consulted with the lawyers and overview the option to take interim bails form the high court in case of cancellations. According to the law experts, the issuances of warrants by the NAB are necessary to arrest the suspects.
Earlier, the banking court extended interim bails of all suspects in the mega money laundering case, and reserved its verdict on the NAB plea of moving the case to Rawalpindi from Karachi.
During the hearing of the fake bank accounts and mega money laundering case, all suspects including Faryal Talpur, Anwar Majeed and others appeared before the court on this occasion, however, former president Asif Ali Zardari excused from appearing.
Counsel Farooq Naek filed an exemption plea on behalf of Zardari. “The former president is busy in National Assembly sessions. Therefore, it is pleaded to the court to allow exemption from today’s hearing,” stated the plea.
Naek also raised the objection in court on behalf of his client. The NAB prosecutor responded that the case is being transferred in light of the Supreme Court’s instructions, and NAB chairman had also approved the transfer, hence the objections had no basis.
Naek said that inspection of NAB Ordinance is need of the time. “NAB has made a wrong claim that Supreme Court has ordered to file the case. There is no mention of FIA case in the proposed JIT report,” stated the counsel.
On this occasion, the NAB prosecutor stated that NAB Chairman Justice (r) Javed Iqbal had approved moving of case to Islamabad. He added that approval for shifting of the case was done in the light of apex court’s order.
Earlier on March 11, a Karachi banking court had extended the bail of Asif Zardari and his sister Faryal Talpur till March 15.
The court had also announced that decision on shifting or not shifting the case to Islamabad will be made on March 15.
On the other hand, the NAB has submitted the second progress report in the fake accounts case. The report informed the court about investigations into the case. Recent arrests made in the case are also part of the record.
Asif Zardari and Zain Malik filed petitions seeking exemption from court. Asif Zardari also submitted his objections to shift the case to Islamabad. The NAB prosecutor stated that under the Article 16, the NAB chairman has authority to shift the case.