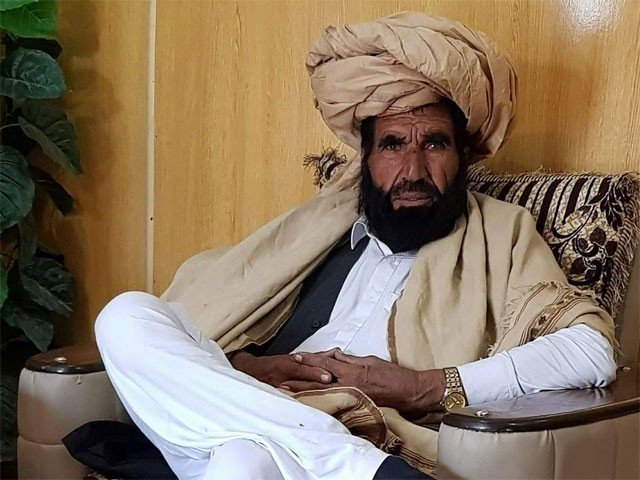 TANK: The funeral prayers of Mohammad Khan father of the late Naqeebullah Mehsud were offered in the Town Hall ground of Khyber Pakhtunkhwa’s Tank district here on Tuesday.
Top civil and military leadership were among thousands present besides tribal leaders. Among those in attendance were Brigadier Imtiaz Hussain and the deputy commissioner of Tank.
Meanwhile, request for video statement of Naqeebullah Mehsud’s father withdrawn in wake of his demise
A request to have the statement of Mohammad Khan — the father of murdered Waziristan native Naqeebullah Mehsud — recorded via video link was withdrawn by his counsel on Tuesday in the wake of his demise a day earlier.
An antiterrorism court (ATC) in Karachi held proceedings today for the ongoing trial of the murder of Naqeebullah, who along with three others, was killed in a staged encounter in Karachi in January 2018.
The court, in March, had indicted former Malir SSP Rao Anwar and 17 others in the case. The former SSP was brought before the court during today’s proceedings.
The ATC was informed that Khan — who was the complainant in his son’s murder case — has passed away.
Khan’s lawyer, Advocate Salahuddin Panhwar requested the withdrawal of the application which was granted by the court.
The next hearing will be held on December 16.
Speaking to reporters outside the court, Khan’s counsel said that an application had been filed with the court to allow his client’s statement regarding his son’s murder to be recorded via video link — and had also been taken notice of — but unfortunately he had passed away after battling with cancer.
Panhwar said his client had been pursuing his son’s murder ever since his demise but unfortunately had fallen ill and had then been hospitalised for quite some time.
“Despite his illness, he had continued to visit various institutions and courts with the hope of finding justice,” he said, adding that his client had been hopeful after receiving assurances from the army chief that he would get justice.
The lawyer said he had spoken to Khan’s legal heirs who were still hopeful the promises made to Khan would be fulfilled.