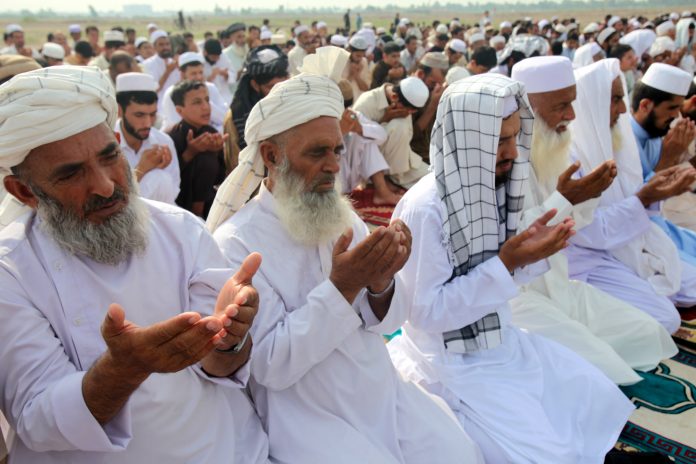 ISLAMABAD: First day of Eid-ul-Azha is being celebrated on Tuesday across the country with full religious fervour and enthusiasm.
Eid prayers were offered by huge congregations everywhere, biggest of which was seen at Faisal Mosque in Islamabad, where thousands showed up.
In Karachi, big gatherings were seen in Memon Mosque Bolton Market and almost all the open grounds among other places in the metropolis.
In Lahore, biggest congregation was witnessed in Badshahi Mosque, as like every Eid, be it Eidul Fitr or Eidul Azha. Security is on high-alert across Punjab and Sindh among other provinces.
Prime Minister Nawaz Sharif along with his sons and Hamza Shahbaz Sharif offered Eid prayers in Raiwind of Lahore.
Big gatherings for prayers were also seen in capital of Khyber Pakhtunkhwa, Peshawar and that of Balochistan, Quetta.
Tight security arrangements have been made across Punjab especially the provincial capital. Over 6,000 police personnel have been deployed across Lahore after their Eidul Azha holidays were cancelled.
Dedicated sites for personnel of law enforcement agencies in context of security are mosques and other installations where Eidul Azha prayers were offered in different areas.
Dolphin Force is accompanying the Punjab Police to make this auspicious day safe for all the people in Punjab amid a constant security threat after Taliban started hitting innocent people and resorted to terrorism in 2004.
According to the details, men had to go through different security checks before entering mosques in their areas in the morning today including walk-through gates and metal detectors while CCTV cameras and barriers were also used.
Special instructions have been issued regarding parking of vehicles near Eidul Azha prayer gatherings.
Locals have been asked to park their cars at least 100 yards away from the prayers meet. Besides the arrangements made inside the city, all the entry and exit points of the provincial capital have been issued high-alert.
It should also be noted here that combing and operations are also underway in different areas of Lahore.