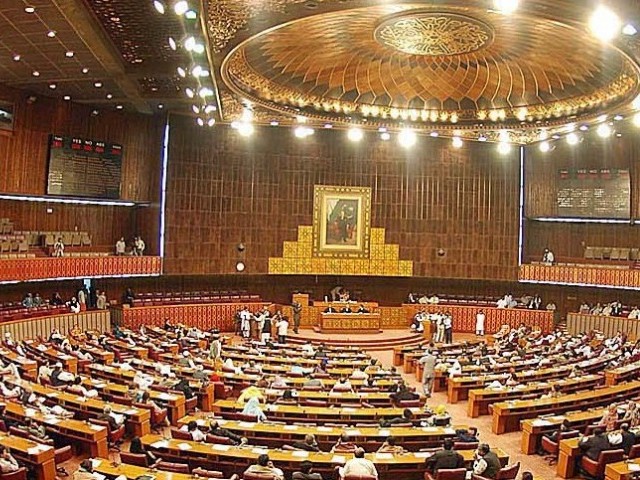 ISLAMABAD: The National Assembly resumed its session at the Parliament House in Islamabad this afternoon with Deputy Speaker Qasim Khan Suri in the chair.
The House is continuing discussion on budget 2019-20.
Continuing debate on the budget for next fiscal year in the National Assembly, Planning Minister Khusro Bukhtiyar said tax to GDP ratio is 11 percent, which will be enhanced to 12.6 percent as no economy can function without having sufficient revenue collection.
He said the government has set an ambitious revenue collection target of over 5,500 billion rupees, enabling the government to provide 35 percent more funds to provinces.
He said Sindh alone will get 200 billion rupees more funds if the revenue target is achieved. He said in first year of the government, our focus will be on economic stabilization with a growth rate of four percent to be enhanced to six percent in the last year with an average of five percent.
The Minister said private investment will be taken to 18 percent from existing 15 percent. He said 10 million jobs will be created in five year terms of the PTI government.
Khusro Bakhtyar said 80 billion rupees have been allocated to improve power transmission system, 43 billion rupees for higher education and knowledge economy, and 13 billion for agriculture sector.
Raja Pervaiz Ashraf of PPP urged the government to take the business community onboard to enhance their confidence over economic policies. He said democracy is the only way to put the country on path of development, progress, and prosperity.
He said political opponents should not be humiliated in the name of criticism to maintain harmony in the parliament.
Shahida Akhtar Ali of MMA terming the budget as anti-poor urged the government to reduce the burden of multiple taxes on people.
Tashfeen Sadfar of PTI terming the budget balanced, said government wants to uplift the deprived sector of society.
Rashid Ahmed Khan of PML-N said subsidy should be provided to the farmers on fertilizers and pesticides. He said PML-N in its tenure added 12,000 megawatts of electricity to the national grid.
Parliamentary Secretary for Federal Education and Professional Training Wajiha Akram said that Pakistan is moving forward on the right track under the leadership of Prime Minister Imran Khan. She said government taking various steps for the welfare of the people.
Ramesh Lal of PPP said minority community has been totally ignored in the budget.
Tahira Aurangzeb of PML-N said IMF has prepared the budget carries no relief for the general public. She urged the government to adopt recommendations of the Opposition in the budget.
Sheikh Rashid Shafique of PTI urged the government to enhance funds for Ghazi-Barotha project.
Dr Shahnaz Baloch of Balochistan National Party said more funds should be allocated for various sectors in Balochistan. She said scholarships for the students and jobs for Baloch youth should be enhanced. She called for need based reforms in health and education sectors.
PTI Leader Lal Chand said natural gas, electricity, and cleandrinking water to various districts of Sindh should be provided. He also called strict legislation to check forced conversions of Hindu community and protection to minorities.