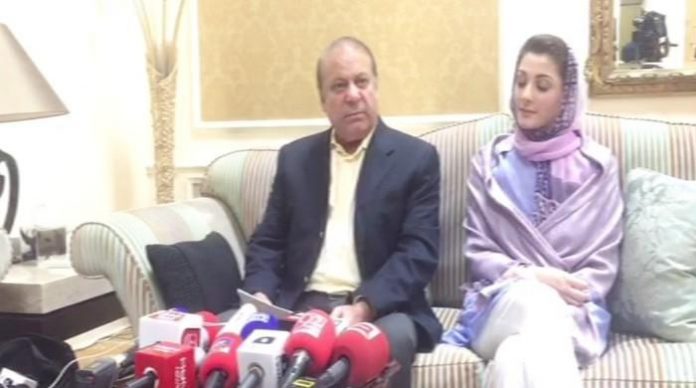 LONDON: Pakistan Muslim League-Nawaz (PML-N) leader Maryam Nawaz announced on Saturday that she will return to Pakistan, along with her father, on Friday, despite being sentenced to eight years in prison in the Avenfield properties case.
The former first daughter was speaking to reporters in London, a day after the accountability court’s verdict, sentencing her father, former prime minister Nawaz Sharif, to 11 years.
“It’s written in the verdict that Nawaz Sharif is not involved in corruption,” she said. “My father has been acquitted from money laundering charges.”
Maryam said that her father also faced accountability during the Musharraf regime, but nothing was proven against him.
The former first daughter said that the Avenfied case verdict, given by an accountability court, was solely based on assumptions.
“The United Kingdom authorities authenticated the trust deed,” she added.
Maryam said the authorities should use red warrants to bring back dictators, who violated the Constitution of Pakistan.
She further said that consultation was underway against the decision and their lawyers were looking at the matter from different angles.
When asked whether they would return within before expiry of a 10-day deadline set for appeal, Maryam said, “Due process will be implied against the court’s decision.”
On Friday, Accountability Court-I Judge Mohammad Bashir announced the verdict in the Avenfield properties reference.
Apart from the prison sentence, Nawaz Sharif was given a £8 million fine (Rs1.3 billion), while Maryam was fined £2 million (Rs335 million).