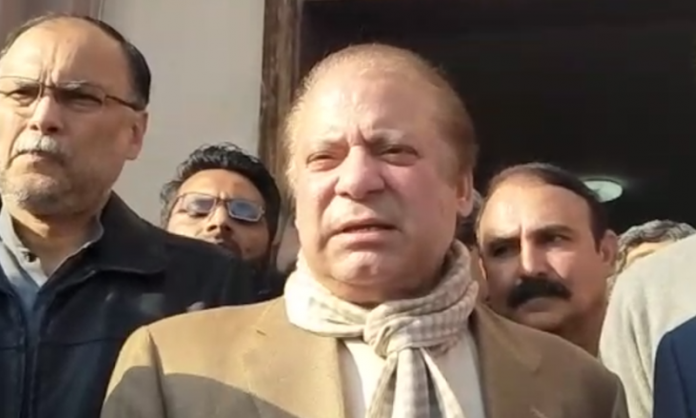 ISLAMABAD: The National Accountability Bureau (NAB) has taken former prime minister Nawaz Sharif in custody shortly after the accountability court convicted him in Al Azizia reference case here on Monday.
The Accountability Court on Monday convicted former prime minister and sentenced to seven years in prison in Al Azizia case while the former PM has been acquitted in Flagship corruption reference.
The PML-N Quaid is being shifted to Adiala Jail in an armoured vehicle, however, the former premier has prayed in the court to shift him to Kot Lakhpat prison.
The court has reserved the judgement and would be announced shortly.
The accountability court Judge, Muhammad Arshad Malik announced the short verdict reserved on December 19 after completion of hearing in Al-Azizia Steel Mills and the Flagship Investment cases against the deposed PM last week.
The court also imposed a fine of $25 million in the Al Azizia case.
Nawaz Sharif’s son Hassan Nawaz and Hussain Nawaz were declared absconders in the case.