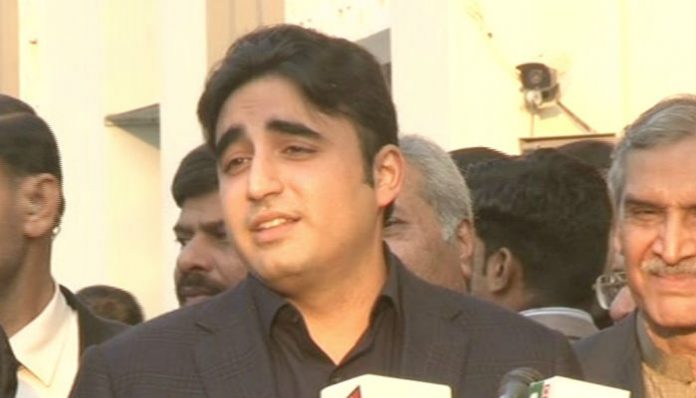 LAHORE: Pakistan Peoples Party (PPP) Chairman Bilawal Bhutto Zardari on Thursday slammed political opponent Nawaz Sharif and said that the PML-N president has been a part of all conspiracies against democracy in Pakistan. “Mian Nawaz Sharif sahab is a threat to democracy.”
While speaking to media in Lahore, Bilawal took a jibe at the PML-N head and said that the former prime minister doesn’t even understand the meaning of ideology. He pointed out that Nawaz is being opportunistic by changing his position and statements to favour himself. “Mian Nawaz Sharif sahab doesn’t understand the meaning of ideology. You can change your position for your own purposes,” he said.
Sharing plans of PPP, he remarked that the party is working hard to strengthen the country’s democracy.
Earlier in the day, sources informed Geo News that Pakistan Peoples Party co-chairperson and former president Asif Ali Zardari has, yet again, refused to meet former prime minister Nawaz Sharif, foiling the latter’s attempts for a meeting for the fourth time within three months.
Zardari, rejecting once again the possibility of any contact with Nawaz, was quoted by sources as saying that the former prime minister “only remembers democratic promises where his interests are concerned”.
“Nawaz Sharif is responsible for the current political situation of the country. Meeting him or shaking his hand is [out of the question],” the PPP co-chairperson remarked.
Addressing a rally on November 19, Nawaz remarked that his name represents an ideology that will bring about a revolutionary change in the country.
“Those who talk about minus Nawaz Sharif, they don’t know today that Nawaz is the name of an ideology. All of you are this ideology. This ideology will bring a revolutionary change in the country.”
Addressing a public gathering at the Abbottabad college ground, the former premier said he has brought his review petition [in the Panama Papers case] to the people. “You have to decide my appeal. Give a decision that echoes far and wide.”
Maintaining that he is not scared of jail or death, he told the crowd, “You have to promise, we will march together towards our destination. Don’t sit at home, we will walk together and change Pakistan’s destiny.”