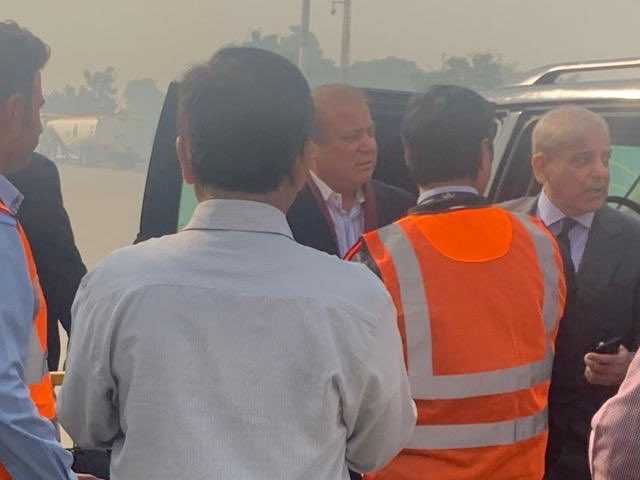 LAHORE: Former prime minister Nawaz Sharif has departed for London in an air ambulance from the Allama Iqbal International Airport, Lahore, accompanied by his brother Shehbaz Sharif. The flight is scheduled to land at Heathrow International Airport at 06:30 PM GMT.
With the flying fuel of 10 hours and two pilots, the air ambulance is equipped with oxygen cylinders, ventilators, an intensive care unit, an operation theatre and other medical facilities, while two doctors, including Sharif’s personal physician Dr Adnan, and paramedics are also on board.
Prior to departure, the doctors inspected Sharif’s blood sugar level, blood pressure and performed a CBC test. Upon clearance of all medical tests and doctors’ recommendations, the air ambulance took off from the airport.
Former premier’s medication has been changed for enabling him to travel. Sharif will be shifted to the Harley Street Clinic in London immediately after landing.
All essential preparations to shift ailing Sharif were made, and a “high-end” air ambulance arrived at the airport from Doha. Sharif arrived at the airport’s Haj Terminal from Jati Umrah at 10am in a form of caravan.
Pakistan Muslim League-Nawaz (PML-N) leaders including Maryam Nawaz, retired captain Safdar, Khawaja Asif, Ahsan Iqbal, Pervez Rashid among senior politicians were present at the airport to see off the PML-N supremo. A large number of party workers were present at the airport to extend their best wishes to the party leader. An ambulance of the Sharif Medical City was also present at the airport.
Despite the convictions for corruption, Sharif remains popular among many people in Pakistan, and his health has dominated newspaper front pages and TV channels in recent weeks.
“Thank God that he has left for the medical treatment he needs urgently,” the party’s parliamentarian Ahsan Iqbal said.
“Nawaz Sharif will go to Boston after going through a detailed checkup in London. During his travel, he will stay in Doha for two hours,” Sharif’s close aide Pervaiz Rashid told Reuters.
But Sharif was only allowed to leave after agreeing to a series of conditions preventing him seeking exile, including submitting periodic medical reports notarized by Pakistan’s embassy in London, according to court documents seen by Reuters.
In a tweet shared on his official twitter handle on Tuesday morning before departure, Sharif’s personal physician Dr Adnan Khan stated that former prime minister Nawaz Sharif will depart for London, UK, via Doha, Qatar, in an Airbus A-319-133LR / A7-MED Air Ambulance managed by Qatar Airways at 10am PST.
According to party spokesperson Marriyum Aurangzeb, Nawaz will be accompanied by his Dr Khan and Shehbaz Sharif during his transfer to London. An intensive care unit and an operation theatre has been set up in the air ambulance and a team of doctors and paramedics will also be on board, Dr Khan said in a tweet last night. Shehbaz Sharif will stay with his brother till his rehabilitation.
“Former PM Sharif will travel to London in a high-end air ambulance equipped with a fully functional and staffed Intensive Care Unit (ICU) and Operation Theatre. A team of doctors and paramedics will be on board headed by an intensivist. ETD (LHE): Tuesday 19 Nov morning.”