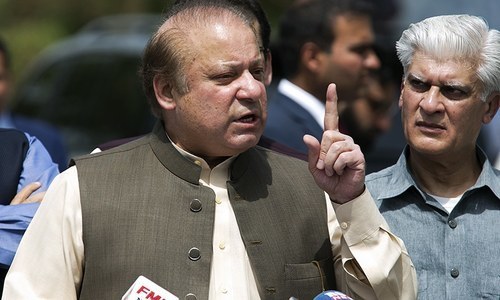 ISLAMABAD: Former Prime Minister Nawaz Sharif and his daughter Maryam Nawaz and her husband Captain (retd) Safdar arrived at Accountability Court in connection with hearing on corruption references filed against them by National Accountability Bureau (NAB).
In the previous hearing on Nov 3, Nawaz Sharif, against whom bailable arrest warrants were issued, acquired bail against submission of two surety bonds of Rs.5 million each in Azizia Mills reference and Flagship Investment reference.
Today, the court will conduct hearing on Nawaz Sharif’s application through which he had sought clubbing of all three references against him.
Nawaz Sharif arrived in Pakistan on Nov 2, less than a month after he left for London, to appear in the court.
Sharif was ousted in July by Supreme Court this year before completing a full term, as a result of a corruption investigation against him.
The court also barred him from heading his party; however, he was later elected as chief of his own faction following legislation.
The cases emerged from Panama Papers leak last year, which sparked a media frenzy over the luxurious lifestyles and high-end London property portfolio owned by his family.