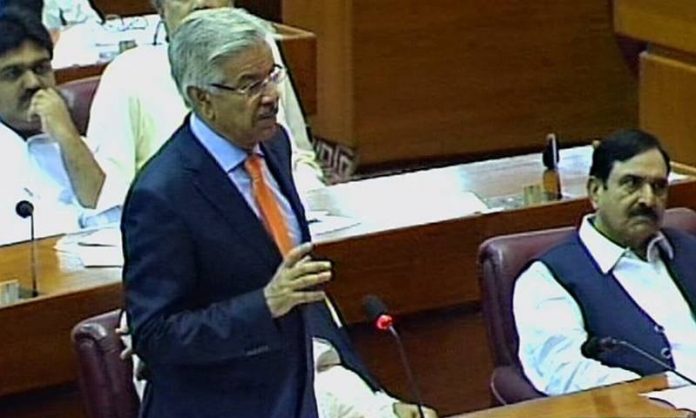 ISLAMABAD: The Pakistan Muslim League supremo Nawaz Sharif is may end his three years long self-exile in London and return to the country in December to lead his party in the next general election.

Addressing to National Assembly, Defence Minister Khawaja Asif said that Nawaz Sharif will return to Pakistan before the end of 2022.

He said if the rights of people were trampled during the PTI long march then the government would take measures to safeguard them.

“Everyone has right to protest but no one can be allowed to cross the limits of law and constitution,” he added.

He rued that during the four-year tenure of the PTI, no development work was carried out in the country.

Talking about the flood victims, Kh Asif said that their difficulties were increasing due to winters. “Winter is a big test for the flood affectees,” he said adding that it was necessary to take stock of the problems being faced by them.

He assured that the government would fulfill its responsibility vis-à-vis provision of assistance and compensation to the flood-affected people.

Responding to the points of Ghous Bux Khan Mahar of GDA, Kh Asif said it is joint responsibility of both the federal and provincial governments to provide relief to the flood affected people without any discrimination.

He said despite limited resources, we have provided cash assistance to the flood affected people. In addition, the Kissan package has also been given to the farmers of the affected areas.

Taking the floor, Environment Minister Sherry Rehman said that the government has felt the pain and sufferings of the flood-hit people. She also assured that resources would be distributed among flood-ravaged people without any discrimination.

She castigated the PTI for holding its long march saying ‘there is no rationale behind holding the long march as millions of people have been affected by the calamitous deluges’.

The National Assembly was informed that 230 high speed coaches of international standard will soon be inducted into the fleet of Pakistan Railways to provide better traveling services to the passengers.

Parliamentary Secretary for Railways Kiran Imran Dar told the house during question-hour session that procurement of 820 high capacity wagons is also at an advanced stage.

Parliamentary Secretary for Industries and Production Shahida Rehmani informed the house that FIA has started an investigation into the theft of three metric ton of brass and copper in Pakistan Steel Mills.

Parliamentary Secretary for National Health Services Shazia Sobia Aslam Soomro said that public complaints regarding shortage of medicines are being addressed. She said medical camps have been established in the flood affected areas to provide timely treatment to the flood victims.

Parliamentary Secretary for National Food Security Ahmad Raza Maneka told the house that import of high yielding dairy and beef animals has been allowed to maintain the demand and supply of both milk and meat in the wake of devastating floods. He said a flood relief mission has been launched in the flood affected areas of Balochistan and Sindh to improve health and nutrition of animals.