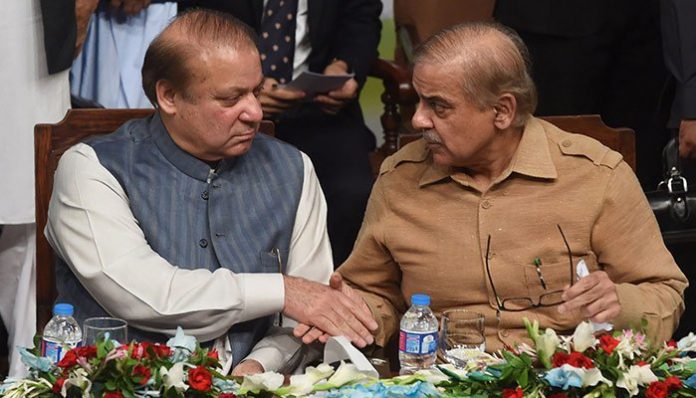 LAHORE: Pakistan Muslim League-Nawaz (PML-N) President Shehbaz Sharif met former premier Nawaz Sharif In Kot Lakhpat Jail and discussed various political and other matters including Islamabad March and murder of minor boys.
Shehbaz Sharif asked about well-being of Nawaz Sharif. The meeting also discussed the arrest of the Pakistan Peoples Party (PPP) Khursheed Shah, the sit-in of the Jamiat Ulema-e Islam-Fazl (JUI-F) chief Maulana Fazlur Rehman and the killing of children in Kasur.
The meeting also discussed the ongoing cases against the Sharif family whereas former prime minister was briefed on the arrest of Khursheed Shah.
Nawaz Sharif expressed that the government will still get nothing if they arrest the entire opposition. “Put politicians in jail, took control over everything and yet the government utterly failed”, he added.
Nawaz Sharif asserted that the people are in serious trouble and current government has stopped even those projects which they started. He also praised former CM Shehbaz and said that the present government could not do anything in the province, in contrary to his brilliant performance.
Shehbaz Sharif informed about some important issues of Maulana Fazlur Rehman’s strategy and suggested that Maulana suggest to hold sit-in in October while we recommend taking a sit-in in November. He also said that Maulana Fazlur Rehman would fail if he could not bring people to the sit-in.
Nawaz Sharif condemned the killing of minor boys in Kasur and said, “People are fed up with the government and lost confidence in it”. Shehbaz replied that government has failed to provide security to the people.
The meeting also expressed serious concern over the increasing cases of dengue.