ISLAMABAD: Pakistan Tehreek-e-Insaf chairman on Thursday said Prime Minister Nawaz Sharif should stop his futile attempts to get foreign governments to bail him out.
The PTI chairman sent out a tweet after a letter from Pakistan’s Ministry of Foreign Affairs to the Embassy of United Arab Emirates seeking a telephonic contact between the prime minister of Pakistan and the ruler of gulf state started making the round on social media. 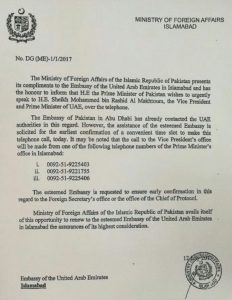 “Nawaz Sharif should stop his futile attempts to get foreign government to bail him out. We have waited 30 years to get justice,” he said. It was not immediately clear whether the Ministry of Foreign Affairs really did send the letter.
A couple of hours after Imran Khan posted the tweet, another senior leader of the PTI Aleem Khan took to Twitter and shared the “letter”.
Nawaz Sharif, who is serving his third term as prime minister, faces opposition calls to step down.
A Joint Investigation Team (JIT), set up by the Supreme Court to investigate corruption allegations that surfaced following the Panama Papers leak, also accused his children, including heir apparent Maryam Sharif, of signing falsified documents about ownership of off-shore companies.