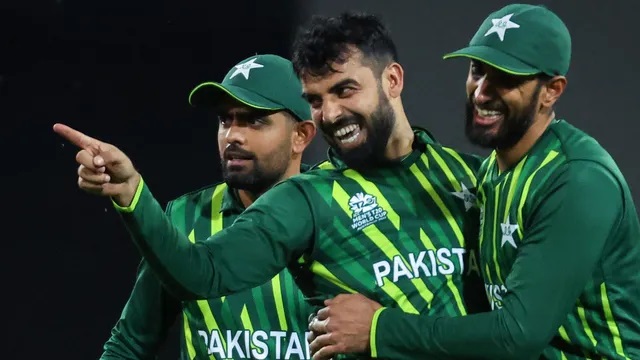 At the toss, New Zealand skipper Kane Williamson opted to bat first and put the Pakistani bowling line up to test.

Pakistan were off to a flying start after Shaheen Shah Afridi dismissed the explosive Fin Allen on the third ball of the innings to leave New Zealand 4/1.

The wicket brought Kane Williamson to the crease and forced New Zealand to be cautious in the powerplay.

Tight overs from Naseem Shah, Shaheen, Haris Rauf and Mohammad Wasim Jr further racked up the pressure on the Blackcaps.

Matters turned worse for New Zealand after they lost opener Devon Conway from the last ball of the powerplay to end the first six at 38/2.

After the end of the powerplay, Babar introduced spin into the game and it proved fruitful, as Mohammad Nawaz dismissed Glen Phillips in the eighth over to further dent New Zealand’s scoreboard.

From then on, the 68-run partnership between Williamson and Daryl Mitchell made it look like New Zealand would post a competitive target for Pakistan.

The partnership broke after Shaheen’s dismissed Williamson in the 17th over.

However, Mitchell along with James Neesham did not let the dismissal stop New Zealand’s attack as the Black Caps ended the innings with 152/4.

For New Zealand, Mitchell was the highest scorer and remained unbeaten for 53.