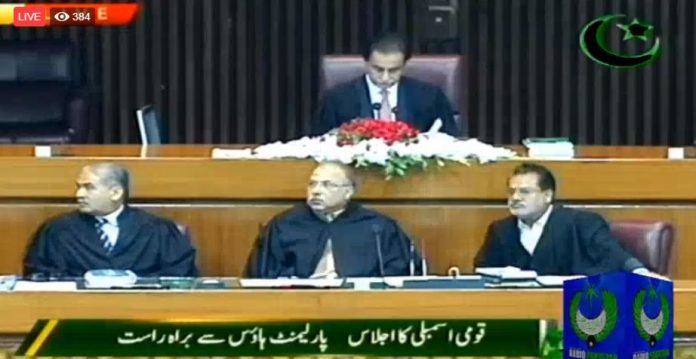 ISLAMABAD: In the inaugural session of the 15th National Assembly, 331 members of the lower house of the Parliament were administered the oath by Speaker National Assembly Ayaz Sadiq on Monday, setting the stage for the second democratic transfer of power from one civilian government to the next in the country’s history.
The newly-elected MNAs include Pakistan Tehreek-e-Insaf (PTI) chairman and prime minister-in-waiting Imran Khan and vice-president Shah Mehmood Qureshi, Pakistan Peoples Party (PPP) chairman Bilawal Bhutto Zardari and co-chairman Asif Ali Zardari.
PTI spokesperson Fawad Chaudhry, former Khyber Pakhtunkhwa chief minister Pervez Khattak, Shireen Mazari, Shafqat Mehmood, Faisal Vawda, Muttahida Qaumi Movement-Pakistan (MQM-P) Khalid Maqbool Siddiqui.
In Peshawar, the provincial assembly’s maiden session is currently underway with Sardar Aurangzeb Nalota of Pakistan Muslim League-Nawaz (PML-N) standing in for KP Assembly Speaker Asad Qaiser – who is at the National Assembly.
According to the rules of business of the house, the outgoing speaker (Ayaz Sadiq) will hold the election process for the incoming speaker.
The Pakistan Tehreek-e-Insaf (PTI) has nominated Asad Qaiser for the post of the speaker, while the joint opposition, comprising 11 political parties, has fielded Syed Khursheed Shah for the post and Maulana Fazlur Rehman’s son Asadur Rehman for the post of deputy speaker.
As per the rules, if there are two candidates for the chair of speaker, then the one who secures more votes will be declared to be elected. Similarly, if both secure an equal number of votes, a fresh ballot shall be carried out until one of them secures more votes.
And the outgoing speaker will take oath from the newly elected speaker and hand the charge of the house over to him. The newly-elected speaker will hold a similar secret balloting process for the election of the deputy speaker and after his or her election the latter will take the oath.
The speaker is considered custodian of the house and as per the rules he is supposed to preserve the order and decorum in the house and in case of disturbance or disorder in the galleries, may cause them to be cleared.
And subsequently, in the absence of speaker, deputy speaker will have those powers to run the house.
Similarly, the prime minister will then be elected as leader of the house and voting for him or her is held in open where galleries are designated with alphabets for the name of each candidate and those supporting a certain candidate can enter that gallery.
After the election of the leader of the house, the speaker will inform the members about the date, time and place for the submission of a name for the leader of the opposition in the house under their signatures.
The speaker will declare a member leader of the opposition having the greatest numerical strength after verification of the signatures of the members.
Shehbaz Sharif is the joint candidate of opposition parties for the post.
After the notification on reserved seats by the ECP, the PTI tally reached 158 members in the National Assembly after it secured 28 reserved seats for women and five for non-Muslims.
The PML-N total strength has reached 82, the PPP 53; the MMA 15; the MQM-P seven; the PML-Q five; the BAP five; and the BNP four seats.
The National Assembly has 342 seats. Of these, 272 are filled by direct elections. While the reserved 10 seats for minorities and 60 seats for women are filled by proportional representation among parties.