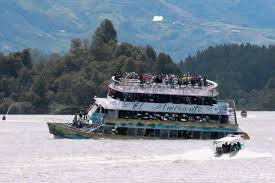 GUATAPE: At least nine people were dead and 28 missing after a boat carrying tourists sank in a reservoir in northwestern Colombia on Sunday, a regional official said.
Authorities did not yet say what caused the four-deck Almirante to go down in the El Penol reservoir in the tourist town of Guatape.
“At the moment we officially have nine people who have been found dead” and “approximately 28 people reported missing,” said Margarita Moncada, head of the disaster prevention department of the Antioquia regional government.
She said the boat was carrying 170 people, most of whom were rescued by other boats or escaped by themselves.
“It sank extremely quickly. It all happened in a few minutes,” said a fire service captain involved in the rescue effort, Luis Bernardo Morales.
One helicopter from the air force and two from the army went to help in rescue operations, the military said.
The reservoir is 68 kilometers (40 miles) from the city of Medellin and one of Antioquia department’s main tourist draws. – APP