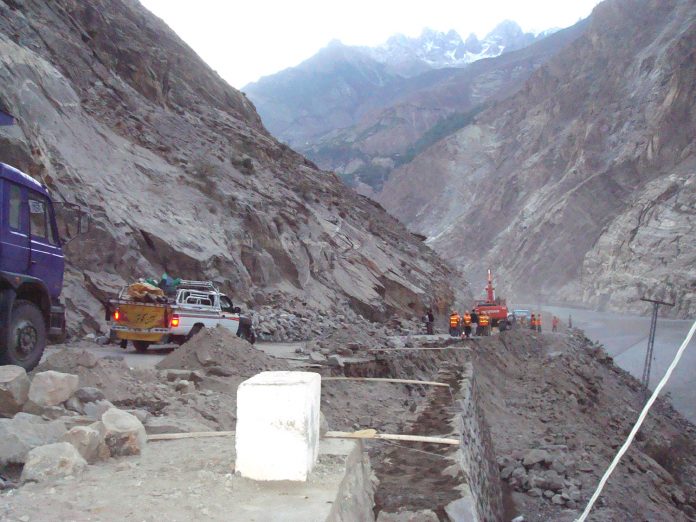 KOHISTAN: At least nine people were killed in a massive land sliding at Karakoram Highway in Dasu area of Upper Kohistan District of Khyber Pakhtunkhwa.
According to SHO Dasu Nasir-ud-Din Babar, the land slide buried the van that was carrying eight labourers. The rescue teams retrieved bodies from under debris using heavy machinery and moved them to nearby hospital.
All of the deceased persons were labourers by profession.
SHO Dasu said that the ongoing expansion work at the Karakoram Highway caused land sliding, resulting deaths of the people.
A few months ago, three young brothers were killed and their father and another brother injured during a landsliding incident in Balochistan’s Zhob district.
The incident happened at a hilly tourist spot Silyazzai, where the ill-fated family of Rahmatullah Safi had come to enjoy holidays.
In December last year, the government had opened first of three tourism corridors, Azad Pattan-Rawalakot Highway, in Azad Jammu and Kashmir (AJK). The new highway links Poonch, Haveli and Kotli.
Bio remediation methods were employed for the first time during the construction process in order to protect the road from landslides. The forest department and the communication and works department were involved in the construction process.