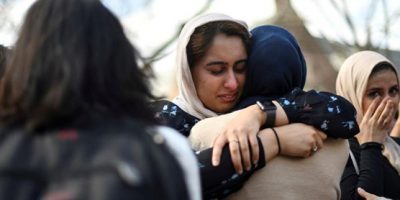 ISLAMABAD: The Pakistan Foreign Office has confirmed that nine Pakistanis were martyred in Friday’s terrorist attack on two mosques in Christchurch, New Zealand.
In a tweet on Sunday, Foreign Office spokesman Dr Mohammad Faisal informed that Zeeshan Raza, his father Ghulam Hussain and mother Karam bibi have been confirmed to have embraced martyrdom, bringing the toll of Pakistanis martyred in the attack to nine.
The names of Pakistanis who lost their lives in Friday’s attack are:
Mr Sohail Shahid
Syed Jahandad Ali
Syed Areeb Ahmed
Mr Mahboob Haroon
Mr Naeem Rashid
Mr Talha Naeem
Mr Zeeshan Raza
Mr Ghulam Hussain
Ms Karam
At least 49 people lost their lives when 28-year-old, far-right Australian terrorist Brenton Tarrant attacked two mosques in Christchurch. Forty-one people lost their lives at the Al Noor Mosque, while seven more died at a mosque in the suburb of Linwood.
Earlier, FO spokesperson said Foreign Minister Shah Mehmood Qureshi had directed for all possible help and assistance to the families of the deceased and missing Pakistani citizens.
Foreign Secretary Tehmina Janjua also spoke to New Zealand ambassador in Tehran Hamish MacMaster, who is also accredited to Pakistan, via telephone, Dr Faisal said.
The foreign secretary conveyed condolences on the tragic loss of lives in the terrorist attack in Christchurch and requested for facilitation in assisting families of affected Pakistanis.
Qureshi said that families of four Pakistani martyrs of Christchurch terror attack had requested for bringing bodies of their loved ones to Pakistan, while relatives of two victims wanted their burial in New Zealand.
He said the government would fully cooperate in bringing the bodies of four Pakistani martyrs back to country.
Pakistani Naeem Rashid, who attempted to stop the white supremacist terrorist who opened fire at the Al Noor mosque, and his son were among those who lost their lives at the mosque.
Fifty people were shot dead by 28-year-old right-wing extremist Brenton Tarrant, who attacked two mosques in Christchurch: the Al Noor Mosque, and another mosque in the suburb of Linwood.
The terrorist appeared in a local court on Saturday on murder charges. He was remanded in custody with no bail requested and is scheduled to appear in the South Island city’s High Court on April 5 and will likely face further charges.