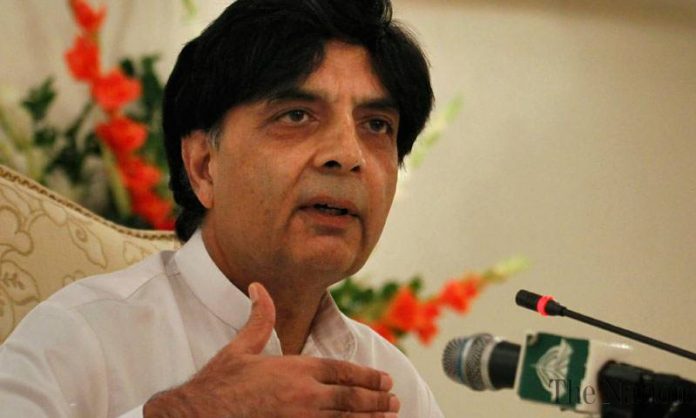 ISLAMABAD: Interior Minister Chaudhry Nisar Ali Khan on Saturday afternoon slammed what he said was ‘unnecessary noise’ surrounding the directives issued by the PM’s Office earlier in the day.
Answering a question on the matter, he started off saying: “Let me first say that I believe that tweets, sent out by whichever institution, are a deadly poison for Pakistan’s democracy, system and justice.”
“Our institutions address each other through tweets and that is very unfortunate,” he said, in an apparent reference to a tweet sent out by the military’s media wing, Inter-Services Public Relations (ISPR), a few hours earlier.
The ISPR had tweeted that the Army had rejected the PM Office’s “notification”, calling it “incomplete”.
“I want to clarify that a notification regarding the inquiry into the Dawn story is supposed to be issued by the interior ministry and not the PM’s Office, and we haven’t issued one yet,” Nisar said.
“We asked the prime minister to give us his in principal approval to issue the notification, but the notification never came to us till today.”
“This document from the PM’s Office was addressed to the interior ministry. They were the PM Office’s recommendations not a formal notification. We are yet to issue our notification in this regard.”
“How did it PM Office’s directive get out?” he asked. “And why is there such a furor around it?”