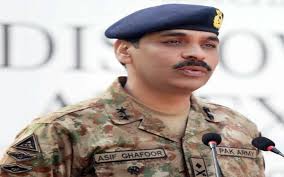 RAWALPINDI: Pakistan Military has categorically rejected Indian media claims of crossing Pakistan border by Indian soldiers along the Line of Control (LoC).
In a tweet, Director General Inter Services Public Relations Major General Asif Ghafoor said, “No Indian soldier crossed over LOC.”
The military spokesman added, “Indian media claim is continuation of their self defeating projections to satisfy domestic audience.”
Indian armed forces late on Monday night resorted to unprovoked firing across the Line of Control (LoC), martyring three Army soldiers.
The Indian forces opened fire along the Line of Control, said a statement by the Inter-Services Public Relations.
The incident of firing occurred in the Rakhchikri sector of the LoC. One other soldier was injured in the unprovoked incident of firing by Indian troops.
Later, Indian media claimed a small team of Indian Army commandos crossed the Line of Control in the Rawlakot-Rakhchakri sector and martyred least three Pakistani soldiers and injure a few others on Monday evening.