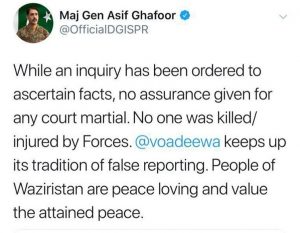 Rebutting the claim of Voice of America Deewa, he said neither any assurance was given for court martial of an army officer, however, an inquiry had been ordered to ascertain facts in this regard.
“VOA DEEWA (an America-based online channel) keeps up its tradition of false reporting. People of Waziristan are peace loving and value the attained peace,” the DG ISPR said.
VOA DEEWA had claimed that “MNA Mohsin Dawar announced an end to North Waziristan’s protest sit-in Sunday following officials’ assurance to court martial captain Zarar who allegedly killed a boy during a protest.”