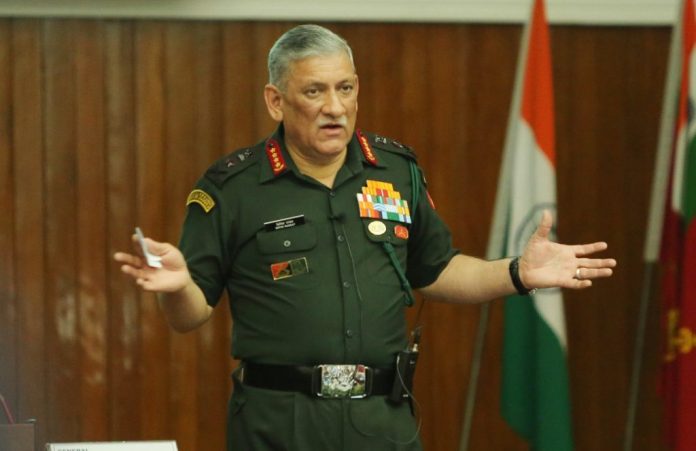 NEW DELHI: Despite Pakistan’s efforts for peace in the region, the Indian army chief General Bipin Rawat has threatened that they could use drones on either the Indian side of Line of Control (LoC) or in Pakistan territory.
While responding to a query whether India will use drones as the United States does, he said, “There is just no problem in using these kinds of weapons” on either the Indian side of the Line of Control or in Pakistan territory”.
He said that they can use drones in Jammu and Kashmir only if people are willing to accept “mistakes and the collateral damage.”
Gen Rawat added that they could use the drones as long as there was no backlash from the public or from the international community.
“You see, across also there can be mistakes. Either way, whether in your territory or the territory across, there will be mistakes. So if we are willing to accept these mistakes, and we feel that there will be no repercussions, there will be no backlash, there is a way forward,” he said.
“It’s not to say that we can’t use it. That is the reason why we are trying to procure these weapons. But these weapons are being procured more for… not for the hybrid warfare systems, we’re looking at it from the conventional war… but yes, anything that we procure has got dual use.”
“But the first issue is of collateral damage. We get so concerned. In your own nation, your people get concerned about collateral damage so much – when you are fighting this kind of warfare, I think you have to accept that collateral damage will happen. It is war. If that is something which we can accept, then there is just no problem in using these kind of weapons.”
“But can we accept it. Will the international community get after us? Or will they spare us in case mistakes happen? That is a call we have to take. Otherwise there is just no problem in using it.” – Agencies