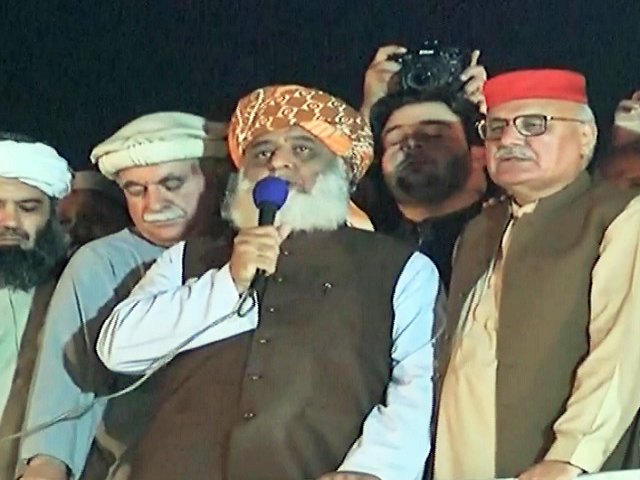 ISLAMABAD: Jamiat Ulema-e-Islam Fazl (JUI-F) chief Maulana Fazlur Rehman said that he will hold the talks with the government committee only when they bring Prime Minister Imran Khan’s resignation on the table.
Addressing the participants of the sit-in, he expressed that the activists of Azadi March obeyed the constitution and the law, and the workers have sent a message of order and peace. “Our sit-in has demonstrated patience and conducted the 15 million marches in a peaceful manner”, he asserted adding that the government should take the Azadi March seriously.
JUI-F chief went on to say that the government made a committee for the rigged election. “When the whole nation is the witness of the rigged polls then only PM’s resignation is required and not inquiry” he said adding that the government leaders will not get NRO.
Maulana Fazlur Rehman further said that the incumbent government ordered containers from all over the country during their protest. “No citizen has faced problem because of our sit-in”, he added.
Meanwhile talking about the PTI’s foreign funding case, JUI-F chief Maulana Fazlur Rehman has said that the Election Commission of Pakistan (ECP) is unable to take action against rulers while on the other hand senior political leadership is being arrested by NAB.
While talking to journalists in Islamabad, Maulana Fazlur Rehman said that those who know how to run a country are being sent to jail while the incompetent government is imposed on us. “The apprehension of political leadership is an illegal act,” he added.
Maulana further stated that top political leadership of the country is very respectful and the way they are being treated by the government is sending clear message to the nation.
“The representatives of current government are stone-hearted people who are mistreating political leadership,” said JUI-F chief adding that the old-aged politicians are still demonstrating resilience.
“I am praying for Asif Ali Zardari’s health, May Allah grant him speedy recovery,” said Maulana Fazlur Rehman.