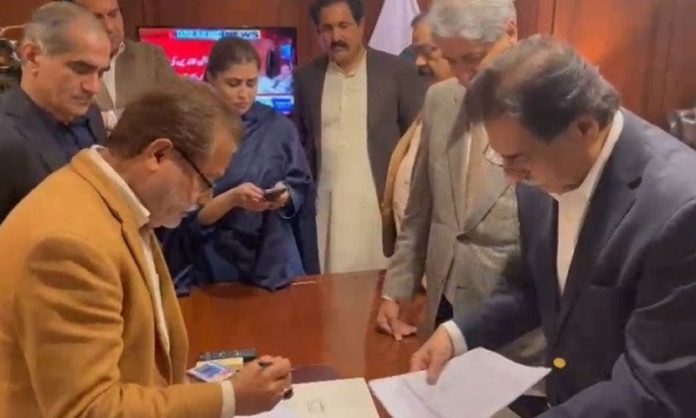 ISLAMABAD: Leader of the Opposition in the National Assembly and PML-N President Shahbaz Sharif is likely to table the no-confidence motion against Prime Minister Imran Khan in today’s crucial session of the lower house of Parliament.

The National Assembly is meeting today at 4pm after a two-day break since the session was adjourned on Friday.

The last NA session was wrapped up almost immediately after it started with the recitation of Holy Quran with NA Speaker Asad Qaiser in the chair, instead of deliberation on the no-confidence motion against the premier.

In today’s session, the no-confidence resolution is the next item on the agenda after the question hour in 27-point order of the day, released by the NA Secretariat.

“This House is of the view that the Prime Minister of Pakistan, Mr. Imran Khan, has lost the confidence of the majority of the members of the National Assembly of Pakistan, therefore, he should cease to hold office,” the resolution bearing signatures of 152 opposition members said.

The Rule 37(4) of Rules of Procedure and Conduct of Business in the National Assembly says the leave to move the resolution shall be asked for after Question-Hour, if any, and before any other business entered in the order of the day.

The Rule 37(5) says that the Speaker may after considering state of business shall allot a day or two for discussion on the motion. As per Article 95 of the Constitution and Assembly’s rules, a resolution of no-confidence against the Prime Minister shall not be voted before expiry of three days and not later than seven days from the day, it was moved.

Moreover, the order of the day for today also includes introduction of a bill for a separate South Punjab province.

Foreign Minister Shah Mahmood Qureshi will introduce further to amend the Constitution of the Islamic Republic of Pakistan [The Constitution (26th Amendment) Bill, 2022] in this regard.

Meanwhile, Adviser to the Prime Minister on Parliamentary Affairs Babar Awan will introduce a Bill further to amend the Elections Act, 2017 [The Elections (Second Amendment) Bill, 2022].