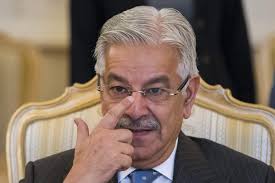 SIALKOT: The nomination papers of Khawaja Muhammad Asif have been accepted by returning officer for NA-73 Sialkot-II, on Tuesday.
The Returning Officer has also cleared the nomination papers of PTI candidate Usman Dar in the constituency after listening detailed arguments from both sides.
Later, talking to the media, Khawaja Muhammad Asif, former foreign minister said the PML-N would again succeed in the court of the masses on July 25, 2018. ..APP