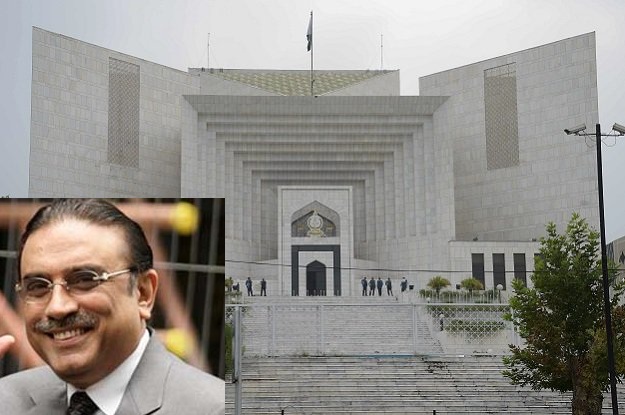 ISLAMABAD: Pakistan Peoples Party (PPP) co-chairman Asif Zardari on Tuesday submitted an affidavit before the Supreme Court in NRO case, stating that he does not own any property abroad.
The document was submitted in a case related to the National Reconciliation Ordinance (NRO), passed by former military ruler Pervez Musharraf.
The document, stated that Zardari owns no moveable or immovable property nor any bank account outside Pakistan.
The apex court has set the hearing for tomorrow (Wednesday).
A three-member bench headed by Chief Justice of Pakistan Justice Mian Saqib Nisar is hearing the case related to NRO, passed by Musharraf in 2007. The NRO granted amnesty to politicians and other individuals by quashing various corruption and criminal cases against them so they could return to the country and engage in the democratic process.
In previous hearings, the chief justice had ordered Musharraf and Zardari and former attorney general Justice (retd) Malik Qayyum to submit the details of their foreign bank accounts.
Nominating Musharraf, Zardari and Qayyum as respondents, petitioner Feroz Shah Gilani had requested the court in April to order recovery of ‘huge amounts of public money’ misappropriated and wasted by them through unlawful means ‘already on record in different judgments of the Supreme Court and high court’.
He had contended that Musharraf subverted the Constitution by declaring emergency followed by the promulgation of the NRO, through which criminal and corruption cases against politicians, including Zardari, were ‘arbitrarily withdrawn’