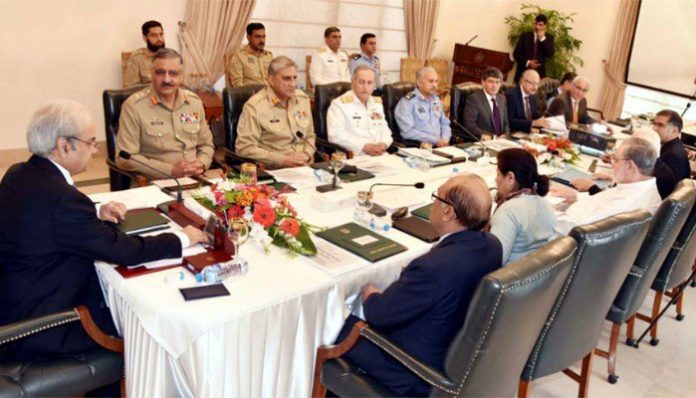 ISLAMABAD: A meeting of the National Security Committee on Friday vowed to fulfill its commitment to fight money laundering and terror financing.
The meeting, chaired by interim Prime Minister Nasirul Mulk, was attended by top civil and military leadership.
Heads of armed forces, Chairman Joint Chiefs of Staff Committee, Director-General ISPR as well as interim federal ministers attended the meeting.
Minister for Finance Shamshad Akhtar briefed participants on the deliberations during meetings of Financial Action Task Force and International Co-operation Review Group held in Paris. She also briefed the attendees on the economic situation of the country.
The meeting also held discussions on the government’s action plan on fulfilling its obligations regarding the FATF decision.
Pakistan was added to the grey list of countries involved in providing monetary assistance to terrorism and related causes, after a FATF meeting confirmed the decision on June 28.
Presenting Pakistan’s case at the FATF talks in Paris, Dr Shamshad Akhtar had apprised the watchdog of the steps the country has taken to stem money laundering and terror financing, and put up a robust case for not placing its name on the greylist.