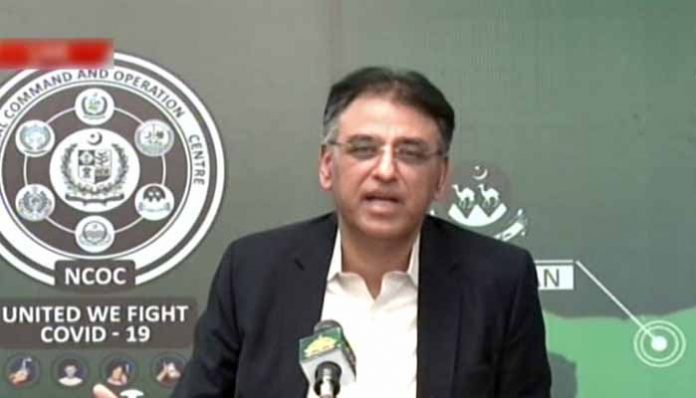 ISLAMABAD: Planning Minister Asad Umar on Friday said that the National Command and Control Centre (NCOC), after reviewing recent Covid-19 figures, believes that the number of nationwide cases by the end of June will be 225,000 or less.
Earlier, the government had predicted that there would be around 300,000 cases by the end of this month. Umar, while addressing the media alongside Information Minister Shibli Faraz, said that the reduction in the projected figures “proves that if we all do the right thing and everyone performs their duty on an individual level while the government does its job on a communal level, a significant success in curbing the spread can be seen”.
Detailing the reasons behind the reduction in figures, Umar said: “Most people realised their responsibility. Not everyone realised [their responsibility] and as a result, the government had to take some administrative measures.
“As a result, we are now looking at 225,000 cases instead of 300,000 — which we initially feared.”
He also explained some measures taken by the NCOC to curb the spread of the novel coronavirus. On May 30, the body issued a guideline, deeming it compulsory to wear a mask at crowded places.
A week later, on June 4, the NCOC issued directives to the provinces to administrative action in order to implement the standard operating procedures (SOPs) laid out by the government. The provinces share data with the NCOC twice a week, Umar said.
On June 14, the NCOC told provinces to expand ‘smart lockdown’, which Umar said had been in place since May. The body pointed out the ‘hostpots’ — areas where a cluster of cases had been detected — in 20 major cities which needed to be sealed. Umar said that while the governments had to take strict action to implement the guidelines, many citizens took precautionary measures after they witnessed the rise in cases.
He cautioned that the reduction in projected figures “does not mean the danger had passed”.
“It is a reminder that if we take the right measures, God will protect us and if we don’t, situation can worsen.”
He said that the body was in touch with the modellers and in a week, the government will inform the nation about what the situation would be by the end of July if the current measures stay in place.
The minister acknowledged that pressure on big hospitals in major cities was high for two weeks earlier. The current scenario, however, “does not seem to be getting to a position where our health system would collapse”.
He urged the people to realise their responsibility towards the doctors and healthcare workers — who are risking their health and fighting for the nation in this difficult time — by taking precautions.
“If we continue to take these measures, our businesses will keep running and life will not come to a halt,” he said.