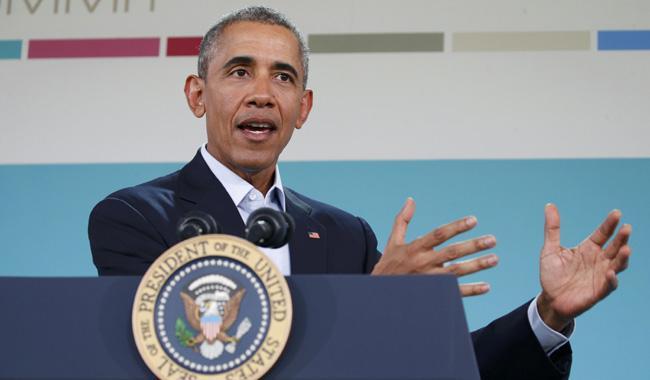 WASHINGTON: US President Barack Obama heads to Dallas on Tuesday to offer comfort to relatives of the five police officers slain in a sniper ambush — and to try to unify a nation struggling to process a raw week of deadly violence and racial tensions.
For Obama, his speech at an interfaith memorial service in the sprawling Texas city — with Vice President Joe Biden and former president George W. Bush at his side — will serve as a monumental leadership test as his presidency winds down.
Eight years ago, Obama´s charisma and ability to inspire propelled him to office as America´s first black president, and raised hopes that the country would overcome some of its deeply entrenched societal divides.
Even on Saturday, as the country reeled from the Dallas sniper attack targeting police, Obama — who cut short a trip to Europe so he could head to Texas — sounded a note of optimism.
"I firmly believe that America is not as divided as some have suggested," he told a news conference at a NATO summit in Warsaw.
"There is sorrow, there is anger, there is confusion… but there is unity."
Soaring words no longer seem enough.
America is all too familiar with armed violence, but the country now finds itself on a new precipice.
From Charleston to Orlando to Dallas, the past year has seen a torrent of slaughter motivated by hate.
The massacres have brought a measure of common revulsion, but not a common purpose, as gun control legislation has remained elusive on Capitol Hill.
"The president recognizes that it´s not just people in Dallas who are grieving — it´s people all across the country who are concerned about the violence that so many Americans havewitnessed in the last week or so," White House spokesman Josh Earnest said Monday.
"The president is hoping to offer some measure of comfort tomorrow."
Black and blue lives matter
Each week seemingly brings a new shaky image of a police officer shooting dead a black American — images that quickly go viral and revive tough questions about race and policing.
Last week, the controversial fatal police shootings of two black men, Alton Sterling in Louisiana and Philando Castile in Minnesota, prompted nationwide anger, with thousands of protesters taking to the streets from coast to coast.
They also seemingly triggered the deadly rampage in Dallas by black Afghanistan war veteran Micah Johnson, as a protest against police brutality was wrapping up.
Johnson, 25, used a high-powered rifle to kill five police officers and wound nine others in a sniper attack late Thursday. Two civilians were also hurt.
He told negotiators before he was killed that he wanted to murder white cops in revenge for the black deaths.
Obama has struggled most to tether the twin ghosts of race and guns that have been raised by the Dallas shooting.
"There is no contradiction between us supporting law enforcement… and also saying that there are problems across our criminal justice system, there are biases — some conscious and unconscious — that have to be rooted out," Obama said.
"So when people say ´black lives matter,´ that doesn´t mean blue lives don´t matter; it just means all lives matter."
´I´d do it again´
In Dallas, Police Chief David Brown said his department was combing through dozens of hours of video footage to piece together the events of Thursday night.
The chaos ended when police used a bomb robot to kill Johnson. Brown defended the use of the $150,000 robot, usually deployed for bomb disposal.

"This wasn´t an ethical dilemma for me. I´d do it again," Brown said.