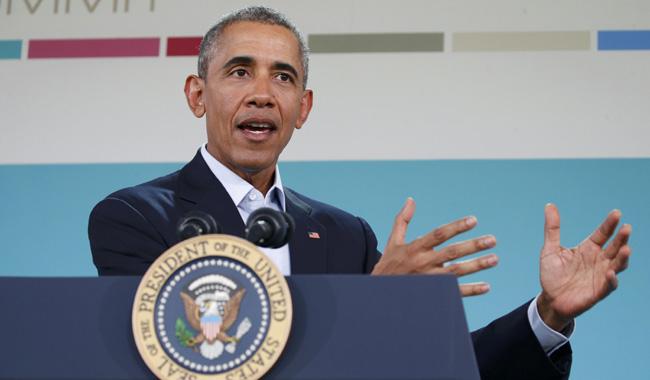 WASHINGTON: Barack Obama vowed to speak up if Donald Trump threatens core US values and reassured Americans “we´ll be okay” Wednesday, in a political swansong after eight years as president.
During his final press conference and public appearance before Trump´s inauguration on Friday, the 55-year-old said he was stepping back but would return to the political breach in extremis.
“I want to do some writing, I want to be quiet a little bit and not hear myself talk so darn much. I want to spend precious time with my girls,” he said.
But, he added, any effort to enforce systematic discrimination, erode voting rights, muzzle the press or round up young immigrants, would cause him to speak out.
“There´s a difference between that normal functioning of politics and certain issues or certain moments where I think our core values may be at stake.”
During the campaign Trump vowed to ban Muslims from entering the United States and deport millions of illegal immigrants, many of them Latin Americans long-settled in the country.
His strident tone since winning election and the contrast with eight years of Obama´s liberal agenda has given the country something akin to political whiplash.
Trump´s supporters are euphoric that political business as usual may be over, while his detractors are fearful of a mercurial and untested leader.
Against this backdrop, the traditionally mild-mannered ritual of a final presidential press conference was given added political weight.
Obama was in turn resolute and reassuring. “I have offered my best advice,” he said, describing his conversations with the president-elect. “I can tell you that — this is something I have told him — that this is a job of such magnitude that you can´t do it by yourself. You are enormously reliant on a team.”
He also warned Trump to think through foreign policy decisions that may be domestically popular, like his vow to move the US embassy in Israel to Jerusalem.
“It´s a volatile environment. What we have seen in the past is when some unilateral moves are made that speak to some of the core issues and sensitivities of either side, that can be explosive.”
Asked about Trump´s stated intention to seek a thaw with the Kremlin, Obama stopped short of criticizing his successor — but noted that his own overtures to Russia were frustrated by an “adversarial spirit” when Vladimir Putin regained the presidency.
He also defended his decision — slammed by Trump´s Republicans — to commute the sentence of transgender army private Chelsea Manning, jailed for 35 years for handing classified US documents to WikiLeaks.
“Let´s be clear. Chelsea Manning has served a tough prison sentence,” Obama said. “I know I feel very comfortable that justice has been served and that a message has still been sent.”
Asked about how his daughters Sasha and Malia were taking Trump´s election, he said he and First Lady Michelle Obama had “tried to teach them hope and that the only thing that is the end of the world is the end of the world.”
“This is not just a matter of ´no-drama-Obama´,” he said, joking about his reputation for a cerebral, even detached approach. “This is what I really believe.”
“It is true that behind closed doors I curse more than I do publicly, and sometimes I get mad and frustrated like everybody else does, but at my core, I think we´re going to be okay.”
Given the rocky transition to Trump´s presidency — which has seen the 44th and 45th president trading barbs — even the venue for Obama´s press conference in the White House briefing room, took on political significance.
Trump´s team has floated the idea of evicting the White House press corps from the West Wing, ending daily on-camera briefings and handpicking who gets access, although some of those suggestions have since been rowed back.
Obama hinted at the changes that may be afoot as he paid tribute to the reporters who covered his two terms in office. …Agencies