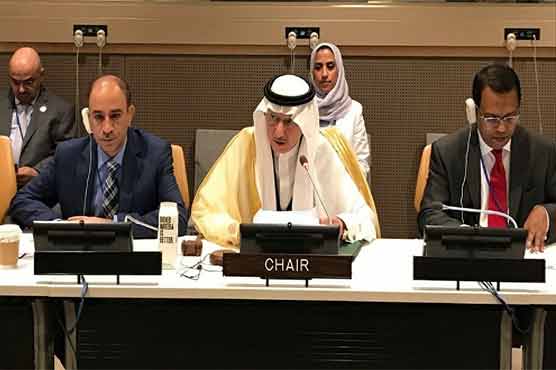 NEW YORK: OIC Contact Group on Jammu and Kashmir has urged India to halt its human rights violations in Occupied Kashmir.
According to a communique issued after the meeting of ministers of the Foreign Affairs of OIC Contact Group on Jammu and Kashmir on the sidelines of the 74th UN session, the ministerial meeting reaffirmed the OIC position and resolutions on Jammu and Kashmir and expressed deep concern over the worsening human rights situation in Occupied Kashmir as a result of India s 5th August action.
The meeting affirmed that Indian actions are inconsistent with international law, applicable UN Security Council resolutions and India s own solemn commitments to implement UNSC resolutions.
The meeting demanded India to repeal its draconian emergency laws and its heavy military presence from Kashmiri cities, towns and villages.
It expressed grave concern that India’s actions aim to change the identity and demographic composition of the occupied Jammu and Kashmir and to transform it from Muslim-majority state into Hindu-majority territory.
The meeting welcomed the two reports issued by the UN High Commissioner for Human Rights in June last and July this year comprehensively documenting the gross and systematic violations of human rights in Indian occupied Jammu & Kashmir.
It deplored the extended, months long, lockdown of the Kashmiri people, round-the-clock curfew and complete communications blackout in Occupied Jammu and Kashmir, and suppression of Kashmiris protestors who demand freedom from Indian occupation.
The OIC meeting expressed serious concerns over the arbitrary detention and arrest of thousands of Kashmiri people and their transportation to prisons and detention centres outside Jammu & Kashmir.
It deplored the indiscriminate use of force, live ammunition and use of pellet guns against unarmed protestors.
The OIC Contact Group noted with deep concern that the suffering of the Kashmiri people has been exacerbated by lack of access to hospitals, medicines including lifesaving drugs and food supplies.
It regretted that India has not allowed the OIC, IPHRC and United Nations Fact Finding Missions to visit Indian occupied Jammu and Kashmir.
The meeting denounced attempts to equate the legitimate struggle of the Kashmiri people for liberation from foreign occupation and their right of self-determination, with terrorism.
It reaffirmed that the Jammu and Kashmir was an internationally recognized dispute as recognized by UN Security Council resolutions and the UN Secretary-General.
It called on the Human Rights Council to accept and implement the recommendations of UN OHCHR to establish a Commission of Inquiry to investigate human rights violations in occupied Jammu & Kashmir.
The meeting called on India to allow full and free access to the OIC, IPHRC and the UN High Commissioner for Human Rights, to Indian occupied Jammu and Kashmir in order to independently investigate reports of the gross and systematic human rights violations taking place there.
It declared that the Jammu and Kashmir dispute is the core issue between Pakistan and India and its final settlement, in accordance with UN Security Council resolutions and a UN supervised plebiscite, is indispensable for durable peace and stability in South Asia and beyond.
It demanded that India rescind its unilateral illegal actions and reiterate its commitment to abide by the relevant UN Security Council resolutions.
It urged India to halt its human rights violations in occupied Jammu and Kashmir, including the use of force against peaceful demonstrators, especially the use of pellet guns, lift the curfew, allow peaceful assembly and freedom of expression, release all political prisoners, activists and abducted youth.
It requested the OIC Secretary General to send a copy of this Communiqué to the UN Secretary General and present a report on the situation in Indian Occupied Jammu and Kashmir to the Annual Coordination Meeting of the OIC Foreign Ministers being held on the sidelines of the 74th session of UNGA in New York on Friday.