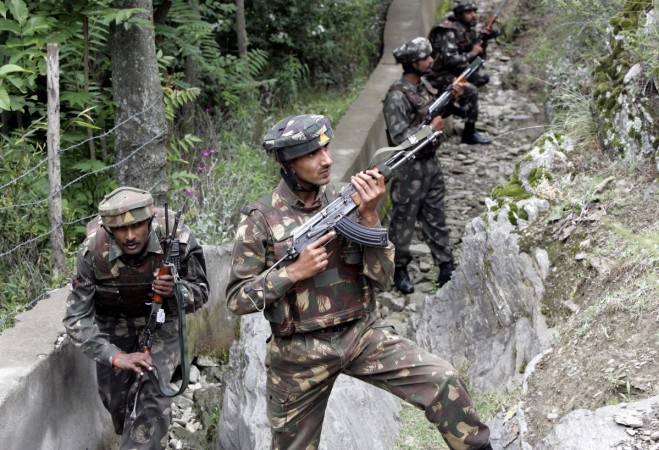 NEW DELHI: Suspected rebels fired on an army camp in Indian Kashmir late Sunday killing one trooper, police said, two weeks after a similar deadly attack that spiked tensions between arch rivals India and Pakistan.
An unknown number of attackers tried to break through the camp s perimeter in Baramulla town but were repelled by soldiers and paramilitaries in heavy exchanges of fire, an army official said.
“One BSF man has been killed and another injured,” senior police superintendent of Baramulla, Imtiyaz Hussain Mir, told foreign news agency, referring to the paramilitary Border Security Force (BSF).
The incident that lasted more than two hours had been brought under control and firing had now stopped, the army s northern command and police said.
The attack comes after India last week launched “surgical strikes” on militant posts across the de-facto border that divides the Kashmir region between India and Pakistan, prompting a furious response from Islamabad.
Indian and Pakistani troops regularly exchange fire across the disputed border known as the Line of Control (LoC) in Kashmir, but sending ground troops over the line is rare.
Islamabad has dismissed the talk of surgical strikes across the heavily militarised LoC as an “illusion” and said two of its soldiers had been killed in small arms fire.
The strikes followed the deadly attack on one of India s army bases in Kashmir that New Delhi blamed on Pakistan-based militants, triggering a public outcry and demands for military action.
The raid on September 18 on the Uri army base by militants hurling grenades left 19 Indian soldiers dead in the worst such attack in more than a decade.
Early on Monday morning, soldiers were searching for the militants outside the Baramulla camp, located some 50 kilometres (34 miles) from Srinagar, and it was unknown if any had been killed or captured.
The militants were hurling grenades during the attack, according to the Press Trust of India, although this could not be confirmed. Residents told local media of loud gunfire coming from the camp.
“Terrorists opened fire on an army camp in Baramulla town,” army spokesman Colonel Rajesh Kalia earlier told foreign news agency.
Since last month s attack at Uri, India has been on a diplomatic drive to isolate Pakistan.
India and Pakistan have fought three wars since they gained independence from Britain seven decades ago, two of them over Kashmir. Both claim the region in full.
A number of armed separatist groups in the Indian-controlled part of the picturesque territory have for decades been fighting to break free from New Delhi.
Even before the Uri attack, tensions were high in the heavily militarised Kashmir region, with weeks of deadly protests in response to the killing of a young, popular militant leader.
The Kashiri separatist was killed during a gun battle with security forces in July.
More than 80 civilians have been killed, mostly in clashes with forces during protests against Indian rule, in the worst violence in the region since 2010.
Islamabad has repeatedly accused India of committing human rights abuses in the Muslim-majority state. …Agencies