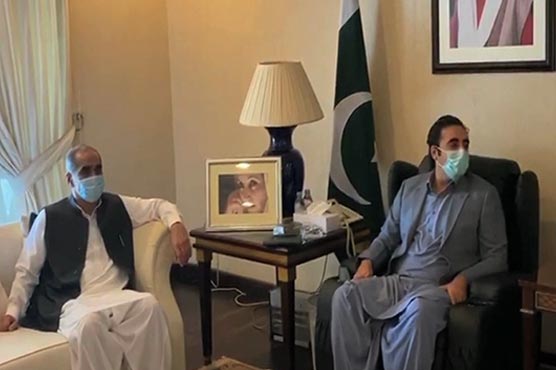 LAHORE: Pakistan Muslim League-Nawaz (PML-N) and Pakistan Peoples Party (PPP) have decided to hold an All Parties Conference (APC) of the opposition against the federal government.
According to details, a three-member PML-N delegation comprising Ahsan Iqbal, Ayaz Sadiq and Khawaja Saad Rafique called on PPP Chairman Bilawal Bhutto Zardari at Bilawal House to discuss the APC agenda.
PPP’s Qamar Zaman Kaira, Raja Pervaiz Ashraf, Chaudhry Manzoor and Syed Hassan Murtaza were also present in the meeting.
Leaders from both parties discussed the APC agenda which included coronavirus, inflation, economic and financial situation of the country along with flour, sugar and medicine scandals.
Furthermore, debate was held over possible amendments in the National Accountability Bureau (NAB) laws, vindictive actions by the government and PPP’s suggestion to bring a no-confidence motion against National Assembly Speaker Asad Qaiser.
Recommendations finalized in today’s meeting between PML-N and PPP will be shared with the heads of other opposition parties for which a proposal to form an advisory committee is under consideration.
Let it be known that the chiefs of other opposition parties have already expressed their support for Bilawal Bhutto.