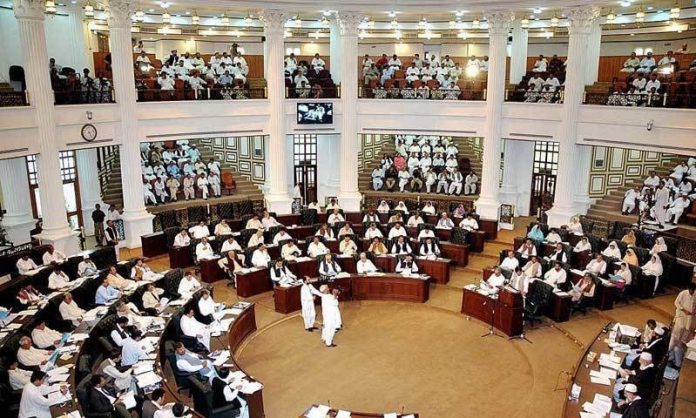 ISLAMABAD: Ruckus was created in the Khyber Pakhtunkhwa (KP) Assembly when opposition members protested for not being involved in the consultation over the Mineral Sector Governance Bill.
Provincial Assembly meeting chaired by Speaker KP Assembly Mushtaq Ahmed Ghani. Opposition members in the meeting protested against passing the Minerals Sector Governance Amendment.
Opposition members gathered in front of speaker dice and raised slogans. The slogan of the ‘selected government’ was also shouted in the House. They said the bill was approved in a hurry, with no consultation on its approval. “Opinion is being ignored in the legislature”, stated opposition.
The bill was approved during the opposition protests. Muslim Family Laws Bill 2019 was also introduced in KP Assembly by the ministers in the House.
Members of the Assembly, Baseerat Bibi and Ayesha Khan, took oath during the session. The Speaker later adjourned the meeting for an indefinite period.