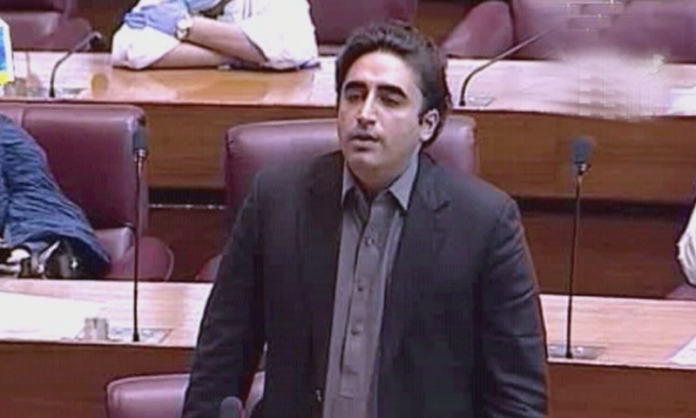 ISLAMABAD: The opposition on Monday, during a National Assembly session convened after a gap of nearly two months, criticised the federal government for its handling of the country’s coronavirus crisis, calling its Covid-19 strategy “confused”.
Deputy Speaker Qasim Suri presided over the session as Speaker Asad Qaiser has quarantined himself after he tested positive for coronavirus on April 28. Leader of the Opposition Shehbaz Sharif was not in attendance as his doctors advised him not to attend due to his medical history.
Addressing the session, PPP Chairman Bilawal Bhutto-Zardari lashed out at Prime Minister Imran Khan for “his failure to lead the country” during this global health crisis, reminding him that he was the premier of the entire country and “not just of PTI”.
“He should have outlined the steps the government needed to take to fight the outbreak.”
According to Bilawal, he had given a message at a press conference to the Centre that “we will fight this pandemic keeping aside political differences”.
Instead, he alleged, the lawmakers and the people of Sindh were targeted and abused by members of the government.
The PPP chairman also criticised the federal government’s inability to provide provinces with the help required to combat the virus.
“The federal government should’ve stood with us shoulder to shoulder. We’re in the midst of a war, and the premier expects us to fight the war on our own?”
He added that the virus has exposed the “true faces” of world leaders. “It has revealed the true nature of US President Donald Trump, UK PM Boris Johnson and unfortunately, it has also revealed the truth about our prime minister’s ineptitude.”
PML-N’s Khawaja Asif said that a “complete lockdown” at the outset would have gotten the country through the pandemic.
“I accept the decision to ease the lockdown because factories aren’t operating and daily wagers are suffering.
“But if we had imposed a serious lockdown at the very start of the outbreak, then we would have been through with this crisis by now. Now when we need the lockdown the most, they are relaxing restrictions,” he said.
He also criticised the government’s inability to increase testing capacity. “Two weeks ago we were told that our testing capacity will be increased to 50,000. But now we are being told that it is only 20,000,” he said referring to comments made by Foreign Minister Shah Mahmood Qureshi at the beginning of the session.
“We have carried out approximately 0.2 million tests for a population of 220 million. The figures that are coming forth, we — and others in the country — think that the figures are being suppressed.”
Comparing Sindh’s response to the outbreak and that of the Centre, Asif said that the province has been taking all the necessary measures to control the outbreak.
“The Sindh government is taking all the steps possible to protect our people. This is not easy as Karachi is the biggest city and has an abundance of slums, but at least we are trying,” he said.
“On the other hand, the Centre has no strategy. What is their lockdown strategy and what is a smart lockdown? Perhaps I am illiterate and am unable to understand,” he added.
Asif also called attention to the fact that all the facilities that were conducting tests in Punjab “were established during the PML-N’s tenure”.
“If we were in Punjab for 10 years, then the PTI has been in Khyber Pakhtunkhwa for seven. What do you have to show for it?” he asked.
Asif also raised the issue of a lack of personal protective equipment (PPE) for doctors and other frontline workers battling the coronavirus outbreak.
“They are our heroes and I pay tribute to their services. They are like soldiers fighting a vicious battle. But have we provided them with adequate weapons?”
The PML-N leader also criticised the premier for confusing the nation through contradictory statements.
“We are tired of it. He’s not providing leadership. He’s providing confusion,” he said.
PML-N’s Ahsan Iqbal urged the National Assembly speaker to give a ruling on the fact that the speech by Asif during today’s session hadn’t been aired on television.
Addressing the session, Iqbal said: “Today is a very important session. This is a national challenge and it is the government’s responsibility to also show the opposition’s speeches.
“Therefore, I urge the speaker to give a ruling regarding this. PTV is a state institution,” he said.
Earlier, Asif had argued that PTV had ended the broadcast after Foreign Minister Qureshi’s speech and private channels did not have access to a direct feed.
The speaker responded that the matter was being investigated. He later added that PTV Parliament was broadcasting the entire session.