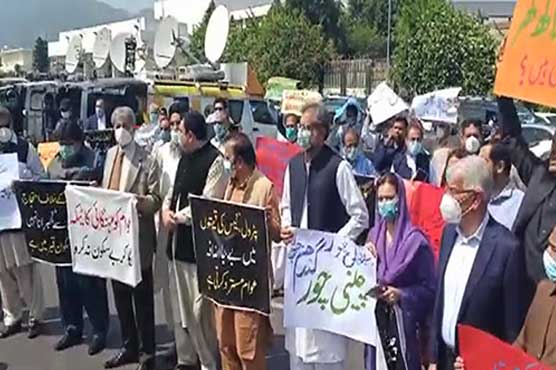 ISLAMABAD: Opposition parties on Tuesday have staged protest against the incumbent government of Pakistan Tehreek-e-Insaf (PTI) and challenged Prime Minister (PM) Imran Khan to win confidence vote.
According to details, members from all the opposition parties have participated in the protest.
On the occasion, Pakistan Muslim League-Nawaz (PML-N) leader Shahid Khaqan Abbasi rejected the federal budget 2020-2021 and said that we are staging protest on roads for the relief of the people. The government has destroyed country’s economy. Price of everything is increasing day by day due to ineffective policies of Imran Khan, he added.
Abbasi further said that the federation has failed to prove any corruption charge against PML-N and Pakistan Peoples Party (PPP).
While talking to media, PML-N’s Khawaja Asif said that the government has lost confidence of its allies. We have to get rid of this incompetent government at any cost, he urged.
The PML-N leader said that petrol prices hike can also increase the cost of electricity and groceries.
Meanwhile, PPP’s Naveed Qamar said that opposition is protesting on the behalf of the nation. All Parties Conference (APC) is expected to be held very soon, he told.
The PPP also asked the reason behind raising petroleum price by Rs25.