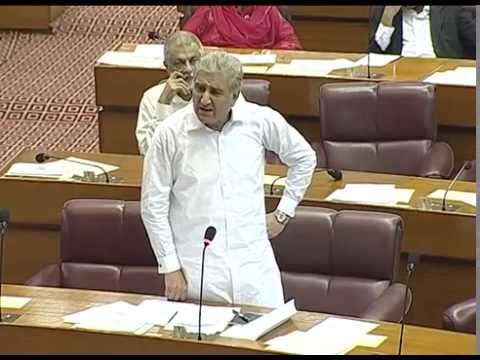 ISLAMABAD: Opposition members protested the Electoral Reforms Bill 2017, which was being tabled in the National Assembly on Monday.
The bill, which was presented by Law Minister Zahid Hamid, if passed will pave the way for former minister Nawaz Sharif to regain chairmanship of the ruling Pakistan Muslim League-Nawaz (PML-N).
Addressing the assembly, Pakistan Tehreek-e-Insaf (PTI) Shah Mehmood Qureshi remarked that the clause 203 of the bill is against the spirit of the country’s Constitution.
The clause seeks to help an unqualified man to become the head of a party, he said, adding that Supreme Court had also disqualified the person.
“You (PML-N) have the majority and we are a minority. But, if you pass the bill then we will challenge it in the court. We want the clause 203 to be removed and Political Parties’ Order must be restored,” said Qureshi.
Responding to Qureshi, NA Speaker Ayaz Sadiq asked him “Why didn’t you speak when you had the chance?”
On the other hand, Opposition Leader Khursheed Shah spoke about the difficulties being faced by ordinary citizens due to high prices of petrol.
Petrol prices across the world are reducing but not in Pakistan. “This is not a big issue but this is an issue which affects ordinary people,” he remarked, adding government is focusing on just creating difficulties for the normal people.
The petrol prices are $44 per barrel. Even after adding some taxes it should be no more than Rs66. However, the government is charging 31 percent sales tax. “Is it really necessary to charge 31 per cent tax? If you reduce the GST then the prices won’t increase,” he added.
“In all developing nations, governments introduce taxes on yearly basis. However, we get new taxes every month,” he claimed. “Budget should be presented four times in the NA,” he said, adding that last time budget was presented such a situation was created that opposition had no other option than to protest it.
“We have always given importance to this parliament. All problems can be solved in the parliament,” he added.
In August, following Nawaz Sharif’s disqualification by the Supreme Court, the ECP had informed the PML-N that according to the Political Parties Order 2002, a disqualified MNA cannot hold any position in the party.
Last week, the PML-N managed to amend the Electoral Reforms Bill 2017 in the opposition-controlled Senate in favour of Nawaz’s bid to become the party president. The bill will now be tabled in the Lower House of Parliament, where the PML-N holds a majority, on Monday.
According to the bill, every citizen will have the right to be a part of a political party, except those in government service, and will also have the right to form a party. It enables the ECP to scrutinise election expenses within 90 days, failing which election expenses submitted by a political party would be deemed to be correct.
The bill states that any parliamentarian could only be disqualified for a period of five years and that ECP will be an independent and autonomous body, which will formulate its own law, and party funding details will be available online.
It also restricts the caretaker government from making any policy decisions.
During a meeting of Central Working Committee at the Punjab House, the party members endorsed a resolution forwarded by Climate Change Minister Senator Mushahidullah Khan.
The party leaders expressed confidence and reaffirmed their trust on the party leader. They also paid tribute to the former prime minister for his services during his tenure.
Meanwhile, the PML-N has also summoned a meeting of its general council Tuesday to appoint Nawaz as the party’s president after his removal from office.
Former senator and the party’s chief election commissioner, Chaudhry Jafar Iqbal, will apprise the members of schedule for the election of party president.
It is quite unlikely for any other PML-N member to file his nomination for post.