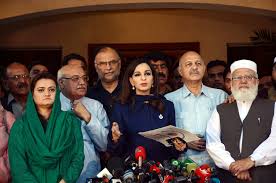 ISLAMABAD: As opposition parties are gearing to flex their muscles on the streets across the country on Thursday (today) to lodge their protest on the first anniversary of the last year’s general elections, which they claimed were rigged, the government too has chalked out a counter-strategy by the observing its rivals’ ‘black day’ as a ‘day of gratitude’.
The joint opposition, which includes the Pakistan Peoples Party, the Pakistan Muslim League-Nawaz, the Awami National Party, the National Party and the Jamiat Ulema-e-Islam-Fazl, announced at their all parties conference that they would observe a black day on July 25 to protest against the alleged rigging in the 2018 general elections and the PTI government’s flawed policies, which were making life miserable for the people.