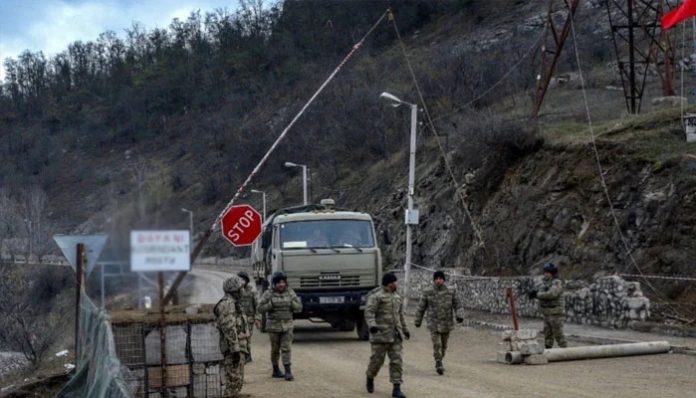 YERVAN: Armenia and Azerbaijan reported nearly 100 troop deaths Tuesday in their worst fighting since a 2020 war over the disputed Nagorno-Karabakh region.

The last wave of fighting over Azerbaijan’s tense Armenian-populated enclave ended in a fragile truce brokered by Russia.

But on Tuesday, the defence ministry in Baku said “50 Azerbaijani servicemen died as a result of Armenia’s large-scale provocation,” while Armenia earlier reported the deaths of at least 49 of its soldiers.

Azerbaijan accused Armenia of violating the ceasefire after a night of clashes that renewed fears of another all-out conflict between the historic foes.

Russia said it had reached a ceasefire between the warring parties that brought several hours of relative calm, but Azerbaijan later accused Armenian forces of “intensely” violating the agreement.

“Despite the declaration of a ceasefire since 09:00 (Moscow time, 0600 GMT), Armenia is intensively violating the ceasefire along the border by using artillery and other heavy weapons,” Baku’s military said.

Armenia appealed to world leaders for help after the fighting broke out, accusing Azerbaijan of trying to advance on its territory.

US Secretary of State Antony Blinken called the leaders of both countries Tuesday, with his spokesman saying Washington would “push for an immediate halt to fighting and a peace settlement” between the neighbours.

He also called for intensified negotiations and offered to contribute along with the European Union, the Elysee said.

The Armenian Prime Minister Nikol Pashinyan had earlier spoken with Macron, as well as calling Russian leader Vladimir Putin and Blinken to demand a response to “Azerbaijan’s aggressive acts”.

Tuesday’s escalation came as Yerevan s closest ally Moscow — which deployed thousands of peacekeepers in the region after the 2020 war — is distracted by its six-month-old invasion of Ukraine.

Armenia’s defence ministry said clashes had subsided after the ceasefire but that the situation on the border was still “extremely tense”.

The defence ministry in Yerevan said the clashes started early Tuesday, with Armenian territory coming under fire from artillery, mortars and drones in the direction of the cities of Goris, Sotk, and Jermuk.

“The enemy is trying to advance” into Armenian territory, it said in a statement.

Azerbaijan, however, accused Armenia of “large-scale subversive acts” near the districts of Dashkesan, Kelbajar and Lachin, and said its armed forces were taking “limited and targeted steps, neutralising Armenian firing positions”.

Baku’s long-standing political and military sponsor Turkey blamed Armenia and urged it instead to “focus on peace negotiations”.

Iran, which shares a border with both countries, urged “restraint” and a “peaceful resolution” to the fighting.

The EU and the United Nations expressed concerns over the escalation and called for an end to the fighting.

Before the ceasefire was announced, Armenia s security council asked for military help from Moscow, which is obligated under a treaty to defend Armenia in the event of foreign invasion.

Armenian political analyst Tatul Hakobyan said the escalation in fighting was a consequence of the “deadlock” in Armenian-Azerbaijani peace talks.

“Azerbaijan wants to force Armenia to recognise Karabakh as part of Azerbaijan,” he told AFP.

“The war in Ukraine has changed the balance of forces in the region and Russia — which is a guarantor of peace in the region — is in a very bad shape.

“In this situation, Azerbaijan wants to get concessions from Armenia as soon as possible,” he added.

Last week, Armenia accused Azerbaijan of killing one of its soldiers in a border shootout.

In August, Azerbaijan said it had lost a soldier and the Karabakh army said two of its troops had been killed and more than a dozen wounded.

The six weeks of brutal fighting in autumn 2020 ended with a Russian-brokered ceasefire.

Under the deal, Armenia ceded swathes of territory it had controlled for decades and Moscow deployed about 2,000 Russian peacekeepers to oversee the fragile truce.

During EU-mediated talks in Brussels in May and April, Aliyev and Pashinyan agreed to “advance discussions” on a future peace treaty.

Ethnic Armenian separatists in Nagorno-Karabakh broke away from Azerbaijan when the Soviet Union collapsed in 1991. The ensuing conflict claimed around 30,000 lives.